Have you heard about the terrible forest fire here? It started on Thursday morning. 42 Prison Service officer cadets were killed when their bus got trapped by the fire-they were on their way to help evacuate people. A police car following was also caught by the fire. Several people are in the hospital in critical condition.
Kibbutz Beit Oren was completely destroyed. Yesterday, help arrived from all over. Cyprus, Greece and Turkey were the first to arrive with large fire fighting planes. This morning I heard that a really large plane arrived from Russia. With this help the fire fighters started to get the fire under control yesterday but during the night, when the planes couldn't fly, the wind came up again and by this morning two towns were under threat.
This is not the usual season for forest fires-let alone the worst fire ever-as its supposed to be the rainy season. We had one small rain in October and nothing since. The weather forecast is for scattered rainfall tomorrow...I just hope it rains up north here. We're east of the fire and don't even see a hazy horizon-just a hot sun and clear blue sky.
Between watching news reports, I've been doing a little machine quilting on the drunkard's path quilt. I decided to do a hanging diamond grid on the yellow...that's done by sewing parallel vertical lines (I'd done that already) and then crossing them with 45 degree diagonal lines. I used a Hera Marker to mark the lines-it just creates a crease in the fabric. It works great on a quilt sandwich...when I first got it I tried to mark just the top-that doesn't work. 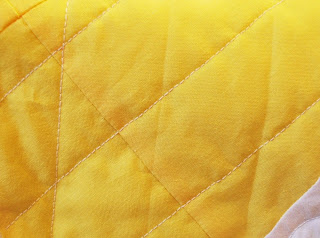 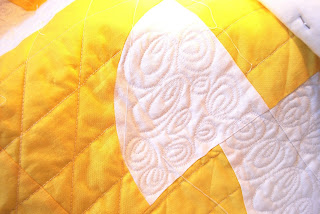 I used the little guide that fits on my walking foot too...sometimes I'm a little obsessive. For the first set of plain vertical lines, I just used the guide but I was nervous about doing that on the diagonal...for one thing-the white areas would pop in at different heights so I didn't always have a starting spot from the previous line. I just eye balled it for the vertical lines but it actually was easier with the markings. 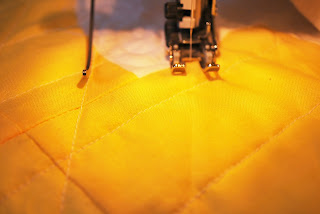 Here its sewn...pretty cool! I've always wanted to do a quilt with a hanging diamonds grid-I can't believe how many long-time goals are getting completed with this quilt. Now I have all those threads to bury... 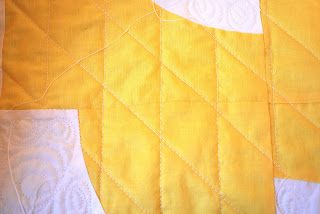 the quilting is looking good. I had heard of the fires you are having and I was ready to send you an e mail to see if you were close to the area and you wrote about - good that you aren't real close to it and I hope they can put it out soon.
Karen
http://karensquilting.com/blog/

Thanks for sharing your technique for quilting the lines. Interesting that the Hera marker (I think I need one of those) would work well on the quilt sandwich. And burying all those threads? Well, I'm embarrassed to say I didn't know threads had to be buried, so thanks for the heads up! :)

I hope you stay safe from the fires and that you get some much needed rain.

Oh, I haven't heard any news about the awful fires. How frightening.
Your machine quilting looks so nice!

Nice work Miri!
I had not heaRd about the forest fires but the loss of life is terrible. Prayers for speedy resolution & comfort for the bereaved.

That is really coming along nicely! It's going to be a beauty.

I had heard about the fires, and I've been praying for all involved.

How sad that those men lost their lives..
we have had fires here too this week that took three days to put out..
Beautiful quilting, Miri..
Julia ♥..

Looking good so far, Miri. I'm looking forward to seeing the photo of the finished quilt, to see the overall effect of the hanging diamonds between the other quilting. So I can think about trying it myself.

The quilting is beautiful and vibrant! Hope the fires die down! blessings,Kathleen

Love your quilting! I hope to learn that one day!

Thanks for your comment. All our hopes our now on the supertanker on it's way. The sky is filled with planes going from the mountain to the sea and back. It is horrible, such a large part of this beautiful mountain park destroyed, so many animals, buildings and people.

Hopefully it will rain tomorrow and than next month, with tubishvat we will plant again!

What a lovely job of quilting. You are so neat! Praying for the fires to be under control, and for all those people who are suffering

The fire is terrible - I've been praying for rain and for the people who got hurt and for the families of those who were killed. Such a tragedy!

I love your quilting, I must get one of those Hera markers.

This looks fabulous! I think I may try out that hera marker. Do the lines stay as you move the quilt around under the arm of the machine?

So sad of a story. I hope you are well and the damage does not continue.