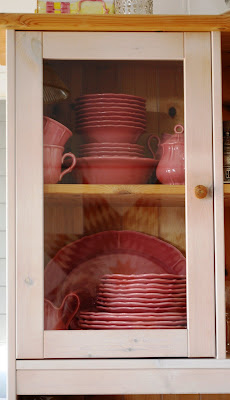 This is the set of Metlox Traditions dinnerware that I got in the 1970s when we were first married. (No, I didn't overprint my dishes with a quilt pattern :)...its a reflection of the Lone Star quilt that hangs on the opposite wall!) 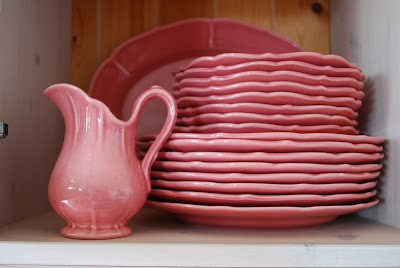 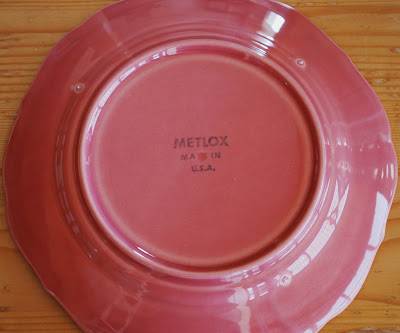 A simple dinner or luncheon table setting...now what could be the menu? 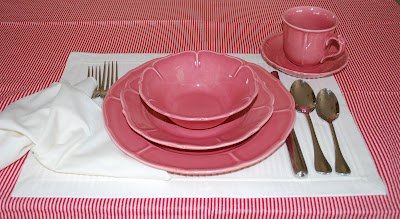 Hmm, maybe I can get an idea from this 1936 cookbooklet from the Philadelphia Inquirer. 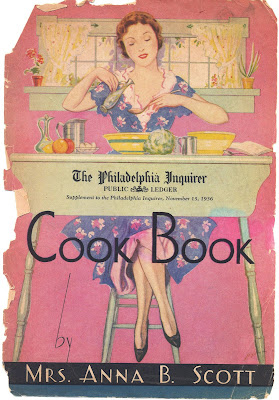 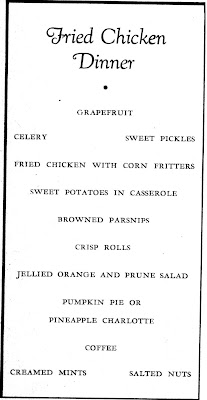 Grapefruit for a first course? Anyone else remember grapefruit for a first course? I do...my Mom served this all the time! Sometimes she would add brown sugar and melt the sugar under the broiler,mmmm...once she got an idea from a magazine-pour red wine on the grapefruit-we thought that was disgusting! but usually it was just a plain half grapefruit, sometimes pink, sometimes yellow...always hard for a kid to eat with good table manners!
Or this? Vegetarians in the 1930s! Imagine that :) 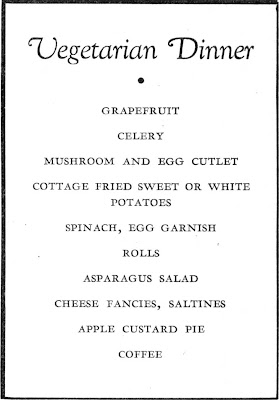 Again, grapefruit!
The Mushroom and Egg Cutlet is actually a variation of a very old recipe for egg croquets that appears at least as early as 1824 in Mary Randolph's The Virginia Housewife (wish I had the original :), alas only a facsimile!) I have actually made the egg croquets for our vegetarian DSIL...now I'll try this "updated" version!
Hope you enjoyed this and maybe got some dinner ideas too!...just serve celery as a first course!
For more vintage treasures, hop on over to Coloradolady.

What a lovely post! I love that pink china, I've not seen anything quite like it, it's gorgeous in your cupboard. And the menus ... so cool.

Love that pink china, I've never seen it before. Beautiful.
Thanks for sharing.

That pink china is the cat's meow! I just love it! Grapefruit does sound like a wonderful summer starter! What a great idea:)

In the first menu - creamed mints? Is that like Creme de Menthe I wonder? Or maybe creamed corn, lol!

Your dishes are a beautiful shade of pink! How did hubby feel about eating off those??

My favorite is the cookbook cover - beautiful!

I like the way the pink book goes with the pink dishes. Pink grapefruit would look nice with the dishes too.

I have only had grapefruit for breakfast or dessert.

I agree with Postcardy with the addition of the Lone Star pattern--I did notice it right away. Love the china and the nice weight of the plate. And yes, I remember grapefruit served, not with wine but with a little brown sugar sprinkled on top. My DH's grandmother served her grapefruit in slices--we just cut them in half and used a special spoon that had a serrated tip to get out the fruit otherwise it would squirt you in the eye.

I'm on my way to find 1970 pink Metlox! I love it!!! Lucky girl you are to be the proud owner of that set! I wonder how much they go for? I think it's the pink that makes me love it even more. Stop by and see my table setting, if you like what you see, be sure to subscribe to my blog by clicking on "Follow" in the right hand column. This way we can inspire one another frequently! Be sure to stay a while when you're there and enjoy the experience!

Miri, I love your dishes, and that they are actually made here in the United States is a big plus! I had to go look at that cookbook online. We've really forgotten how hard it used to be to be a housewife, haven't we!

I love the dishes. My Mom used to serve grapefruit for Breakfast and supper. I still love the Ruby Reds from Texas...hummm they are so sweet.
Molly

I love the pink china. Pink is my favorite colour!
Micki

I just checked the Mr. Linky blog and they been having hardware problems lately! Mr. Linky is unfortunately down for the night:(

Thanks for sharing. Love that pink color.

Those are some beautiful plates!!! They look new!!!

I can't imagine eating that much food for dinner! That really is a lot of food. I can't imagine the time that it would take to make it all either! hehehe

I can't believe your hubby let you get pink dishes! These are great, love the shape and the color.

Pink china?? I've never seen pink china before. I hadn't known that I needed it before now either. I love your collection.
My mother did the grapefruit thing as well but mainly it was the cottage cheese and peaches on a bed of lettuce. I liked it when I got older but generally speaking, I don't think it's nice to serve cottage cheese to a minor :)

Such beautiful dishes....but ooooo
that cookbook. One of my favorite things is cookbooks, the older the better..and you have a great one.
Happy VTT..have a wonderful weekend..

Lovely pink china! I remember the grapefruit starters, too. Not my favourite at that age.
I was having internet problems all day yesterday, I hope to see the vintage blogs today.

Hmmm, the grapefruit before dinner thingie! Maybe that was the "basis" for the wacky "Grapefruit Diet" of the late 60's-early 70's?

These are just beautiful. Sorry my visit is a bit tardy...darn blogger yesterday....but it was worth the wait to look at these wonderful dishes...love the color.

I love these dishes. They also remind me of Fiestaware. Or McCoy. Really wonderful.
And the menus! I have often heard that eating grapefruit befoer a meal helped you lose weight.. but I have no idea why. I don't remember us ever having it that way when I was little.
But my great-grandmother was diabetic in the 1920's, and she had a very special diet.. and wrote some of it down. Sounds quite similar to the vegetarian dinner in your cookbook. Fascinating.

Those dishes are gorgeous!

Miri, that is beautiful dinnerware. Never had grapefruit as a first course...always for breakfast.

What fun pink finds (also happens to be my favorite color, I also looove those dishes!). Thank you for stopping by my blog :).

I just love those pink dishes. And the little cookbooks are so neat.

I love your pink china. So pretty! I never eat grapefruit. I always found it too sour for my taste. I can remember my parents eating them for breakfast. They would each eat a half.