News from Migdal: Quilting and otherwise

Interesting doings lately in our little village on the Sea of Galilee. We got a call the other day from the Rabbi of the new Reform congregation we're thinking of switching to...he was conducting a wedding for 2 Americans right on the shore of the Sea of Galilee and could we attend as they had no family with them. So we did and it was a lovely wedding-right at twilight-and we were the only guests! We had thought there would be members of the congregation there too but no! DH says he's done his good deed for the year! :)
Migdal has been in the news-even TV reporters have been seen all about. When we got back from the wedding, we stopped in at the corner grocery for milk and heard all about it.
Three years ago, a well known Rabbi from the center of the country (read big city!) relocated here for "health reasons". Now we know he relocated because of-you guessed it-scandal! He had been misbehaving with one or more of his adult students and it seems he has not mended his ways which is why its all coming out now.
One reporter from a big daily national newspaper wrote, "An important figure with many followers goes overboard and gets exiled to a faraway village in the north".Exiled! Faraway village! LOL!
Why do city folk think living out in the country is exile and why do they all want summer homes here?
Well, now that you're all caught up on the most exciting local news in years...here's some quilting news! 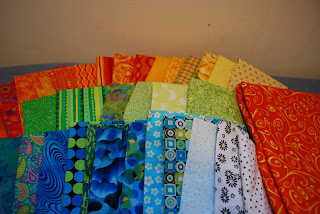 The fabric I ordered for a new commission just arrived and with it, the black fabric I need for DS's string quilt. I just love these bright fabrics on a grey winter's day!
Posted by Miri at 2:11 PM

there is always something happening to keep life from getting boring.

Love your assortment of fabric. Keep us up to date on the quilt's progress please.

Love the fabric. It is always funny to hear that we who live in the countryside live in the back of beyond. Interesting how you were called to witness the wedding.
Karen
http://karensquilting.com/blog/

Oh Miri the scandal is everywhere isn't it? I think they should have to repent by serving in some public forum instead of running to hide.
I like the retro designs in your Vintage book especially the orange & black one and your new fabric is divine!
It snowed all day today I couldn't see the cabin up the ridge! I am already in withdrawal from not sewing this week, but there will be none until next Wednesday! Sew for me, Miri!

Love the new fabrics, and can't wait to see the finished quilt.

This has definitely been the year for scandal, but maybe it's a shame to publicize it on a blog. We have been in the news enough lately...