Tuesdays Tomes: Loss of the SS Titanic by Lawrence Beesley plus photos 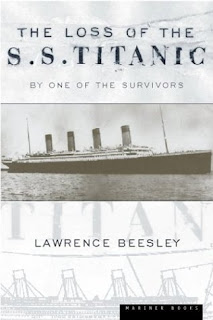 Tuesdays Tomes: weekly book reviews. Read a good book lately? Blog about it and add your book review post in the Linky below.

Loss of the SS Titanic by Beesley

Lawrence Beesley, a science teacher and journalist, was a 2nd class passenger on the SS Titanic and published this book in June 1912, just two months after the disaster. I’ve seen the movie “Titanic” and I was very interested in getting the “true story” rather than the one.

Mr. Beesley clearly states why he thought it important to write about the disaster:

“The whole civilized world was stirred to its depths when the full extent of loss of life was learned, and it has not recovered from the shock. It should not recover from it until the possibility of it occurring again has been utterly removed from human society, whether by separate legislation in different countries or by international agreement."

Mr. Beesley goes out of his way not to sensationalize the tale of the Titanic's silking but to state in clear words what he witnessed and to report what other survivors stated. Indeed, another of his reasons for writing this book was to counteract some of the sensationalist reporting.

He begins with the start of his voyage and the people he met during the first four days of his voyage. One of the saddest things is that of some, he then writes, “I have not seen any of them since that afternoon.”

He writes of that fateful Sunday night,

“And then, as I read [in bed] in the quietness of the night,…there came what seemed to me nothing more than an extra heave of the engines and a more than usually obvious dancing motion of the mattress on which I sat. Nothing more than that-no sound of a crash or of anything else: no sense of shock, no jar that felt like one heavy body meeting another.”

To me this description of what must have been exactly the moment of impact with the iceberg is very moving and tells so much as so why the passengers were so unaware of any danger.

As a 2nd class passenger, when told to put on his life vest and go to the Boat Deck, his boat deck was for the 2nd class passengers and women and children from the 3rd class (steerage). I was so happy to hear this because so much has been written about the famous 1st class passengers and so little about the others, that I was under the impression that all the steerage passengers must have perished. He describes the calm atmosphere on deck and answers the question about why some boats were only half full.

He eloquently writes of the need for government regulations and explains why market forces are not enough…I have to say that what he says is still timely today too.

”In the last analysis, it is not the captain, not the passenger, not the builders and owners, but the governments through their experts, who are to be held responsible for the provision of lifesaving devices. Morally, of course, the owners and builders are responsible, but at present moral responsibility is too weak an incentive in human affairs--that is the miserable part of the whole wretched business--to induce owners generally to make every possible provision for the lives of those in their charge; to place human safety so far above every other consideration that no plan shall be left unconsidered, no device left untested, by which passengers can escape from a sinking ship.”

The reader, Allyson Hester, has a pleasant, cheerful voice and I look forward to hearing her read other books but I must say it was a little weird at times to hear her sunny voice read this book.

You can download this free audiobook here or download the free e-book in pdf. or Kindle format here.

Underwater photo of the Titanic above and plaque from a lifeboat below.

Recovered artifacts from the Titanic 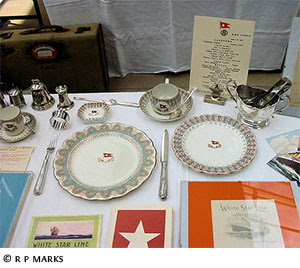 Thanks for the book review, I'd love to read it. I've recently become very interested in the Titanic...again.

Oh this is fantastic, to read the real account of how people may have felt. I am now down loading this book.
Thank yoiu for a great review!
Terry

The galleries at Titanic Belfast employ a variety of interactive media including CGI, film, audio and full-scale replicas to make you feel the real Titanic experience. The galleries include:Titanic Ireland