Tuesdays Tomes: The Angel of Terror by Edgar Wallace

Tuesday Tomes is a weekly book review of mainly vintage books. If you’ve reviewed a book recently-new or old- send me an e-mail and I will link to your post. 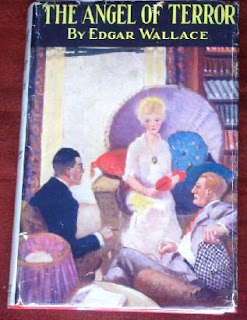 The Angel of Terror by Edgar Wallace

Edgar Wallace wrote more than 170 books-many of them crime stories. In the Angel of Terror, (1922) he may have invented a new genre-the comic crime romance melodrama. Wonderfully read for Librivox by Allyson Hester, using a variety of comic voices, has gotten the perfect tone.

The story begins immediately with the sentencing phase of the trial of James Meredith-accused and found guilty-mainly due to the testimony of his fiancée, Jean Briggerland, of the murder of Ferdinand Bulford.

Here’s what the judge has to say:

"To suggest, as you have through your counsel, that you called at Miss Briggerland's that night to break off your engagement and that the interview was a mild one and unattended by recriminations is to suggest that this lady has deliberately committed perjury in order to swear away your life, and when to that disgraceful charge you produce a motive, namely that by your death or imprisonment Miss Briggerland, who is your cousin, would benefit to a considerable extent, you merely add to your infamy. Nobody who saw the young girl in the box, a pathetic, and if I may say, a beautiful figure, could accept for one moment your fantastic explanation.

Ah, what fools are men when confronted with a beautiful woman with the heart of a snake. James Meredith and Jean Briggerland are first cousins-he extremely wealthy, she not. If James dies, she inherits. Rather simple really. But things don’t go as smoothly for Jean as she had hoped. James’ best friend, John Glover, arranges a marriage for James so that not only does James stand in Jean’s way but his new bride. , as well. How this all plays out-from the marriage to the end of the book makes for a rollicking and rather hilarious tale.

Edgar Wallace’s devotion to details of the scene-often at the tensest of moments- helps set the humorous tone. This tale includes just about everything from a trip to the to a dashing Moor (warning-there is a racial epithet used here) to gamblers and chauffeurs. Part of the fun-I’m not sure who is the intended heroine here, sweet clueless or beautiful, conniving, lethal Jean.

Oh, my gosh aren't the old mysteries fun to read? Thanks so much for the free audio link. I had not heard of that before.