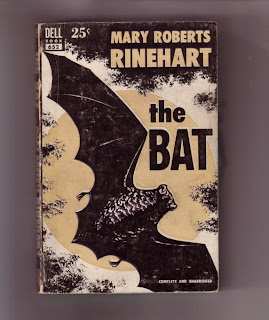 The Bat by Mary Roberts Rinehart

There’s a master criminal about…he’s burgled and murdered with impunity. No one can catch him. Detective wants a chance but his police supervisor is reluctant to let him having already lost another fine young detective to the chase- Detective Wentworth was found gunned down with a paper bat pinned to his chest where his badge should have been.

Aristocratic and adventurous Miss Cornelia Van Gorder has just rented a country house in the suburbs right in the neighborhood where The Bat is now working. She thought it was so fortuitous-just when she decided she wanted to leave the city for a while, this house became available through the sudden death of the owner, Mr. Courtleigh Fleming of the Union Bank. With her niece Dale and her long time servant Lizzy, they have just settled in when suddenly all the servants, excepting the Japanese butler quit and a threatening letter arrives. “If you stay in this house any longer—DEATH. Go back to the city at once and save your life.” But Miss Van Gorder won’t leave!

This country house mystery romp is just chock full of interesting characters with several of them having hidden identities just to add to the fun!

Mary Roberts Rinehart is often called “the American Agatha Christie”. Her first mystery, The Circular Staircase (available here at Librivox –its good but because it has multiple readers I will not be reviewing it on Tuesdays Tomes) was published in 1906. Her last book The Frightened Wife was published in 1953.

In 1920, The Bat first appeared as a play (written with Avery Hopwood) and was immediately acclaimed on Broadway. In 1926, the prose The Bat was published. It is said that it inspired Bob Kane to create Batman! In 1933 RCA Victor brought out The Bat as a recording-one of the first audio books! It was made into movies in 1926, 1930 and 1957 with Vincent Price (but of course!).

You can download this free audio-book here or the free e-book in pdf. or kindle format here.

Wonderful - she's another of my favorites, thank you! My dvd player on my computer died yesterday, so I'm needing more books to listen to, lol!