Tuesdays Tomes: Being a Boy by Charles Dudley Warner 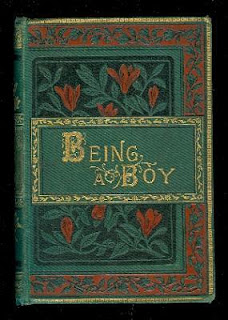 Being a Boy by Charles Dudley Warner
Being a Boy definitely fits into the nostalgia genre. Whether speaking in generalities about a New England boy's life on a farm or when calling the boy John as Charles Dudley Warner sometimes does, it is clear that this book is autobiographical. Charles Dudley Warner was raised on a farm near Charlemont, Massachusetts from 1835-1844 (from the age of 6 until 14). He was a lawyer in Chicago for a few years but returning to New England, he is best known as a newspaper editor, including co-editor of the Hartford Courant. He was also the editor of Harper's Magazine. He published Being a Boy in 1877.
The chapters extol the "fun" of being a boy on a farm with all the moans about chores. The delightful remembrance of driving the ox wagon for the very first time in an early chapter is simply wonderful...the adult feelings about the boy hitting the ox with his whip thoughtful. The story of the boy's first party and the description of the games played vs. forbidden dancing is hilarious. (Yes, the games included kissing games!).
We get a peek into the yearly cycle of a 19th century farm including Thanksgiving (with an interesting aside about pumpkin pies), Maple Sugaring, Sundays, Winter School and more.
I thoroughly enjoyed this book...it is rare to read a childhood autobiography about the first half of the 19th century. The author remembers a Grandfather who fought in the Revolutionary War! Here's a short excerpt to give you a feel for this book and its unexpected take on things:
" Say what you will about the general usefulness of boys, it is my impression that a farm without a boy would very soon come to grief. What the boy does is the life of the farm. He is the factotum, always in demand, always expected to do the thousand indispensable things that nobody else will do. Upon him fall all the odds and ends, the most difficult things. After everybody else is through, he has to finish up. His work is like a woman's,--perpetual waiting on others."
Exuberantly read by Mark Penfold, you can download this free audio-book here or the free e-book in pdf. or Kindle format here.
Posted by Miri at 6:34 AM

Great review and that cover is beautiful!

This one sounds like something I would love - thanks, once more, for your info!
Isn't that a beautiful cover?!

Sounds right up my alley. I'll have to check it out!

Hi Miri,
YOu seem to have a knack for finding intriguing reads. Thanks again for sharing your finds.