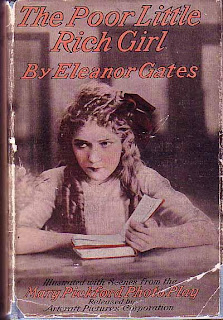 This book was not at all what I was expecting. I knew it had been a Shirley Temple movie and I thought that I remembered that the family loses its money and the poor little rich girl becomes poor. That is not the plot at all! (I now think I mixed it up with another Shirley Temple movie: The Little Princess based on the book by Francis Hodgson Burnett.)

There are actually 2 Poor Little Rich Girl movies: the first starred Mary Pickford and the second Shirley Temple. I love the marketing for the first movie: merging book and movie.

This book is really quite strange.

Little Gwendolyn lives in the nursery. She’s cared for by her nursemaid Jane, her governess Miss Royle and the footman Thomas with a French teacher and music teacher periodically giving her extra lessons. She is sometimes called downstairs to pay a brief visit to her parents in the dining room and to be shown off to their various guests.

Its her seventh birthday and she thinks she’ll now be grown up and she hopes to have dinner with her parents and to go day school. Her fondest memory is of a week spent in the country with her parents where she was allowed to play with a local little boy, Johnnie Blake. They went fishing and he told her that he was all grown up because he was seven.

Frustrated at every turn by Jane, Miss Royle and Thomas and fairly abandoned by her parents (they send a cake up and gifts but don’t even see her on her birthday) she is miserable. She asks Thomas to let her go with him when he walks the dog and he says no and then to quiet her tells that she could be kidnapped! Jane threatens her with “calling the doctor” and “the policeman will come” pretty much whenever Gwendolyn wants to do something other than sit at the window seat and play pretend. When the three hear that she wants to eat dinner with her parents and go to school they watch her even more carefully and as little as she sees her parents they would prefer that she not see them at all so she couldn’t make her requests.

Gwendolyn hears the adults around her and is often confused by the many idioms she hears: ”she’s two faced”, “he’s head over heels”, etc. She constantly asks questions and is constantly rebuffed. (These idioms are rather a theme in this book and it might be fun to actually count them.)

Getting more and more frustrated, Gwendolyn lashes out the only way she can-by crying and tantrums. She’s put to bed where she just cries herself to sleep. The next day, she still doesn’t want to get up and by evening Jane is a bit concerned. She asks Thomas if there is any more of “the quietin’ medicine” but there isn’t. She wants to have the doctor in but Gwendolyn really gets quite hysterical at the very idea (she’s become really quite terrified of the doctor thanks to Jane’s threats) but she agrees that Jane can call him for more medicine.

Now here is where the story gets strange. I’m convinced this medicine is Laudanum-a liquid opium mixture that was very prevalent in the 19th and early 20th century and was given to women and yes, children for nervous complaints. It was even given to infants by their nurses to quiet them.

Jane puts a teaspoonful in a cup for Gwendolyn, gets distracted by the organ grinder outside and goes to the window to shoo him away telling Gwendolyn to drink the medicine. She does-but she puts the spoon in Jane’s coffee cup. Jane, returning to the bed, doesn’t believe Gwendolyn actually drank the medicine and sniffs her coffee cup. Hmm, it smells of the medicine (from the spoon) and despite Gwendolyn’s complaints, gives her another teaspoonful!

Except for the last chapter, the rest of the book is Gwendolyn’s opium induced dream. There’s the organ grinder and Jane, Miss Royle, Thomas, her lost teddy bear, her parents and all those idioms-now explained -with literal meanings. (Some of these are quite enjoyable-one, the King’s English is completely un-understandable!)

Gwendolyn, through her dream, works out to her own satisfaction many of her frustrations and you can just imagine how her illness works on her parents so by the end of the book all is well.

It’s rather hard to believe The Poor Little Rich Girl was meant as a children’s story-it’s more a guide for parents. If any children did read it, I think that they would decide that they didn’t want to be rich!

Perfectly read by Susan Umpleby, you can download the free audio-book here or the free e-book in pdf., e-pub or Kindle format here.

I found the Mary Pickford movie at You-Tube. The first segment is really quite delightful and true to the book. (I peeked at the Shirley Temple movie and immediately I saw it was quite different.) So if you'd like to watch...

Sometimes being rich is not all it's cracked up to be, is it? Poor girl. I remember the Shirley Temple movie, but have never seen the Jane Pickford one.

Oh, my goodness, I did not know about the plot to this book. I've seen the Shirley Temple movie years ago but I remember Little Princess more. I think I might check this out. I love old stories like this, weird, I know. I love your reviews!

i had this book as a kid (might still have it somewhere) and it was very very odd. I didn't know about laudenum at the time, but yes...I agree with you - an opium induced dream.