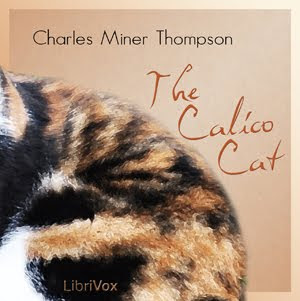 Mr. Peaslee and his wife moved into town from their farm one year ago and ever since he has been tormented by a rascally calico cat who likes his hen house. He’s convinced that this calico cat is the smartest, most annoying cat ever: a cat that delights in making him miserable.

When he’s full of his good news-he’s been called to serve on the county Grand Jury and pictures himself serving with wisdom and great dignity, he sees that calico cat sitting on the fence. He’s certain that cat is mocking him and he goes a little crazy. He tries to shoot it!

Now don’t worry, the cat is fine but the ramifications of that shot go far.

This hilarious, generous hearted tale of a small American village on the Canadian border is filled with wonderful characters.

A first novel (1908) by Charles Miner Thompson with illustrations by F.R. Gruger, this story first appeared in The Youth’s Companion, a family magazine (1827-1929). BTW, Francis Bellamy who wrote the Pledge of Allegiance in1892 (it was adopted by Congress in 1942) was a staff writer at The Youth’s Companion.

Charmingly read by Allyson Hester, you can download this free audio-book here or the free e-book in pdf., e-Pub or Kindle format here.