This Karo Syrup Cook Booklet is from 1949. Karo Syrup was introduced to the market in 1902 and came in little tins. By 1910, Karo Syrup was heavily advertised in women's magazines and already two cookbooks had been published by the company. 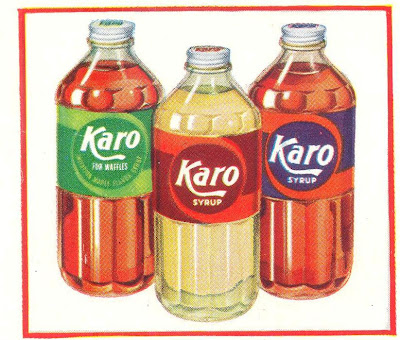 In 1938, a new Karo syrup was introduced.. the green label, For Waffles syrup with maple flavor. I have to say that I never knew this syrup existed! Anyone out there remember using this? I like how it was called "For Waffles" rather than Pancake Syrup.
According to the Karo Syrup website, the 1930s also saw the introduction of, to me, the most famous and basic Karo Syrup recipe...Pecan Pie! Hmm! This booklet includes a Peanut Pie recipe...with a little note that Pecans or shredded coconut may be substituted for the peanuts! 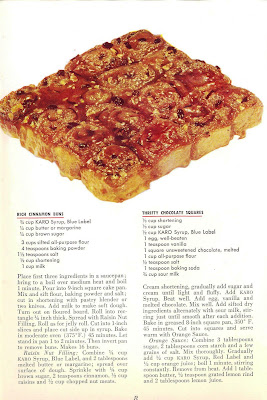 This sticky-bun recipe looks really good...no yeast! I was going to make this yesterday but then my son got whiff of the fact that there was no chocolate involved. :)
This past week, I read an article in the New York Times about how sugar is making a "comeback" as a natural, healthful ingredient against high-fructose corn syrup. Pizza Hut has "the Natural" pizza, Pepsi has "Pepsi Natural" and there has been a bit of a run on Kosher for Passover Coca-Cola because it is made with sugar and not corn syrup. Even in these times, you can sometimes get a chuckle from a newspaper!

For more Vintage Treasures, go straight to Coloradolady...just click on the button!

No.. I never saw the waffle Karo either. But mom always made her own pancake syrup with regular white Karo and maple flavoring. Until I grew up and moved away, I didn't know there was any other kind.
Love the old ad!

I grew up thinking Karo syrup was only used for pecan pies and hard candy. And since I don't make either I can count only once having bought it. The cover picture is too cute.

Passover Coca-Cola?
Oh man, thank you for that sticky bun recipe. I SO needed that.
I always use Karo on my pancakes and my daughter in law uses it on her candied yams. She looked at me like I was crazy when I said I never heard of that. Texas stuff, I guess.

I don't recall ever seeing Karo waffle syrup... and peanut pie, I'd have to give that one a try.
I have always said natural is best...thanks for the info, very interesting.
Thanks for stopping by my blog, I love the music also, Stars on the Water is my all time favorite, not only for the beat but because the words describle our Gulf Coast so well.

Coca-Cola afficianados have been stocking up on pesadik coke for a long time... (I've got mine for the holidays - it is already calling my name...)

I am going to stock up on some other pesadik items for after the holiday to avoid some of that HFCS - like ketchup & jelly.

I am old enuf to remember the Waffle Karo..I love these little vintage booklets..thanks for sharing.

Anything in the news these days is questionable...first, don't use sugar, then use sugar - same with butter, and milk!!! Can't trust a soul, can we!

Geat old cookbook,we use Karo syrup in cooking all the time around our house.

Karo syrup is a classic, and I'm sure the recipes are great. The sticky buns look really good.

I've never seen "waffle karo syrup". Hmm. My memory of karo syrup was using it for my daughters when they didn't feel well (would add to a tea we brewed and put in bottles) and for caramel corn.

Thanks for the yummy sticky bun recipe.
Micki

I don't think I remember the green label, but maybe I do, maybe my grandmother had that, but for some reason, I don't think I liked it..funny how you can almost remember something, but are not quiet sure.....

I may have to try that sticky bun recipe....healthy or not!

Not sure I understand all the fuss about "high fructose corn syrup" but I'm sure there are reasons! Everything that comes around goes around & what was good last year is bad this year & vice versa LOL.
It's fun to compare "then " & now recipes, isn't it?
Roslyn

Ooo, I love your Karo cookbook. I have a Karo one, but it's not the same. Needless to say, cookbooks are also a favorite of mine. Thank you for sharing yours with us. Happy VTT and have a great weekend.

Thats neat. Sugar is making a natural comeback how funny. Sugar is awful to me my body just can't handle sugar, corn syrup, fake sugars....But I crave it LOL

Pecan Pie for the life of me I can't make it and it is hubbies favorite pie. I have tried so many times and never have made a good one.

That is so interesting! Thank you for sharing with us! ~Kelly

The bottles still look much the same. I just made pecan pies this week using the recipe from the back of the bottle. I had to buy a new bottle to make the recipe and I saw the Karo Waffle syrup on the shelf. I thought it was a new item. Who knew? I also remember my mom using the dark syrup to make my sister's formula.

oh my goodness that is cool! I love old ads :-)

That is so awesome! I've never seen waffle Karo syrup, but my husband just puts plain ol' light Karo on his waffles and pancakes.

I'm with you - the pecan pie recipe with Karo is the very best!

That is one old sugar syrup recipe book! I bet it has plenty more yummy recipes. mmmmmmmm SUGAR

i love that cheeky picture on the cover..aren't the colours bright & cheerful :)

The booklet's cover is cute! Great find, Miri. I used some Karo's the other night when I made caramel corn and I'm thinking might need to try that Sticky Bun recipe now. I'm always reading on blogs and websites about people going to Mexico to get Pepsi that's made with sugar and not corn syrup. I'm sure they're happy it's available (or will be soon) in the US now.

This post was a blast from the past. My Mother always had bottles of Karo in the pantry, dark and light. I think she made everything you talked about. I can almost taste those sticky buns! Thanks for the wonderful, warm memories of my Mom.

I never knew waffles and pancakes called for different syrup!

What a fun old cookbook. That cherub wearing only an apron is so cute.

corn syrup in karo is different than high fructose corn syrup .. green label karo is still available in some supermarkets in the philadelphia / south jersey area .. i like the blue label bottle myself for pancakes or waffles, and baked beans

I had used all three but some need to realize it is not fructose syrup, there is a difference. I cook a lot with the red label and the blue label for my Christmas candies. Love it.
Love all the comments.
miny mouse