I've had two very nice things happen in the last couple of days.

Firstly, I won Karen's give-away! I never win anything! I'm so excited...wait til you see these wonderful acrylic templates! I can't wait to see what I can make with them! Check out Karen's blog-its really great!

Then DH came home from the Post Office with a package for me! Inside- this lovely Yellow Rose of Texas stained glass mini-quilt from my Spring Blossoms Mini Quilt swap partner, Tennye L. GiOtis. Tennye didn't include a card so I don't know if she has a blog...but she is from Texas! Anyone know her? 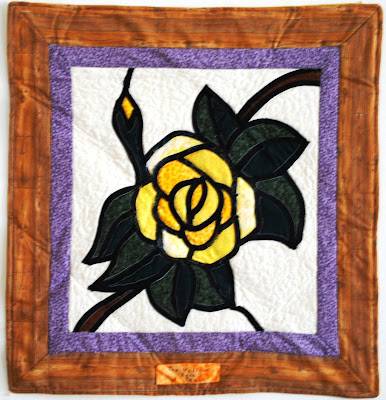 Tomorrow we're going to a Maccabiah Games baseball game. Yahoo! The Maccabiah Games are held in Israel every 4 years and Jewish athletes come from all over the world to participate. Tonight we watched the opening ceremonies on TV-I love seeing the parade of athletes with their national flags (a favorite part of the Olympics for me too!) The largest group, of course, was from Israel (1,200) , next the USA (over 900) , 560 from Great Britain and another group from Scotland-wearing kilts! and 300-400 from several countries-Australia, Argentina, Brazil, Canada... There are two athletes participating from Costa Rico-the smallest contingent! but also athletes from Azerbyjian (sp?), Finland, Sweden, Holland...oh, I could go on and on.

It was especially nice to see the large group from Australia. In 1997, there was a terrible accident as the Australian athletes were crossing a bridge to enter the stadium-the bridge collapsed killing 4 athletes and coaches and injuring many-some very very severely. It really was terrible.

The Maccabiah Games have a special place in my family. The Games began in 1932 and were held again in 1935. My cousin Yehuda was a boxer and he participated in both Games, traveling from Europe. He, like most of the athletes, did not go back to Europe after the 1935 games but merged into the Jewish population in British Mandate Palestine. He was the only member of the European branch of my mother's family to survive the Holocaust. You can imagine the excitement when my cousin Fanny, traveling in Israel on a visit was able to reunite with him and meet his wife and children... over the years, Yehuda and his family traveled to the US to see the family and the family traveled to Israel to see him-all thanks to the Maccabiah Games!
Posted by Miri at 1:49 PM

What interesting information you gave about these games and your family - I had never heard of these games. It sounds interesting.
I will get your package out tomorrow I wonder how long it will take to arrive? :)
Karen
http://karensquilting.com/blog/

Congratulations on your win, and your lovely swap quilt! And what a GREAT story about your cousin. So glad he survived!

Have fun and thanks so much for telling us all about it. Congrats on your win too!
Micki

What an interesting family story. Thanks for sharing it!

Interesting stories! I have never heard of these games either. At least not that I can remember. Love the little quilt you got in the swap. What fun to get packages!