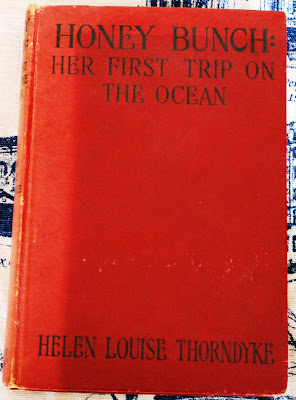 The Honey Bunch books were one of the Stratemeyer Syndicate series. (Others were Nancy Drew, the Hardy Boys, Tom Swift and more) This is the eighth book in the series and was published in 1927. The author, known for this series as Helen Louise Thorndike, was Josephine Lawrence. She met Mr. Stratemeyer (yes, there really was one!) when she was a reporter and interviewed him. He told her to send over a story if she ever wanted to write fiction and she did.
Josephine Lawrence wrote the first sixteen books in the Honey Bunch series, from 1923-1934.
She went on to write adult (and juvenile) fiction under her own name.
This is the fly leaf! Isn't it darling? There's Honey Bunch and her friends and they have many
adventures...but Honey Bunch has the best adventures-she's always going off with her parents on an adventure. 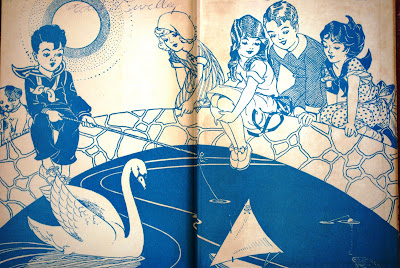 See, she's off on a trip on an ocean liner! (Yes, Honey Bunch's family is quite "comfortable"!) 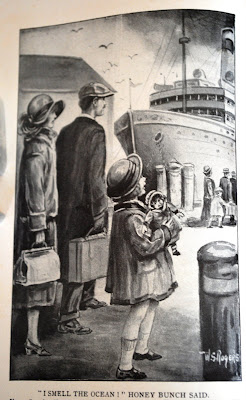 Here's the table of contents and you'll get the idea of the kind of adventures Honey Bunch has:
The Bon-Bon party, New York again, Tess and her jewels, and best of all, Bermuda days...oh I would love to have some adventures like Honey Bunch! 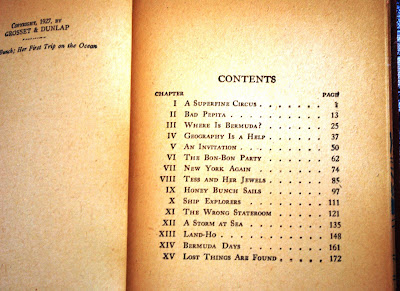 This second vintage book is quite a different kind of story. Its the tale of a young woman and her family settling Alaska! The book dates from 1949 but this edition, purchased at the public library sale recently for NIS 5 or $1.25, is from 1962. 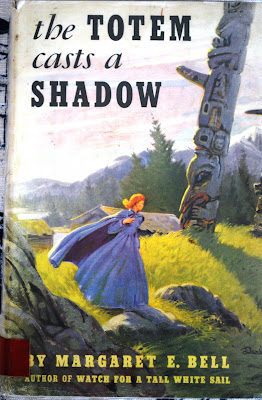 The dust jacket art was actually the original Frontpiece so I got two of this rather odd painting. 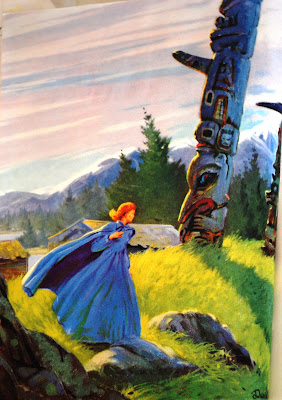 I have actually read this book-at first I thought I wouldn't like it, that it was extremely dated in its attitudes but it turned out that it wasn't and was really I think quite a powerful and empowering book for a girl in 1949. She learns to look at the world through her own eyes even when it means challenging her father's views and comes to understand that she must do what she believes is right. 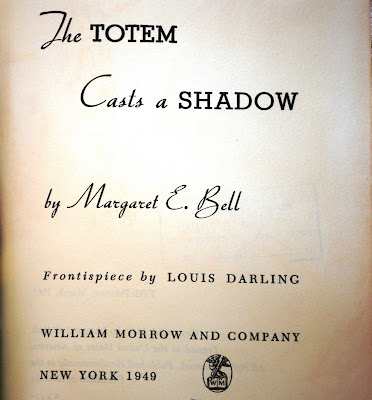 Margaret Bell wrote many other historical novels of pioneer life and I'm going to keep my eye out for them!
To see more vintage treasures or to join us in the fun, hop on over to Coloradolady!

I always loved the Nancy Drew books and so did my girls. I bet my daughter Mel still has some of them on her books shelves even though she is in her mid 30's now!
Karen
http://karensquilting.com/blog/

Lovely books.
My favourite book as a child was "The Magic Faraway Tree" by Enid Blyton.
Julia ♥

What great books, I have never seen anything by Margaret Bell, I think I would like these types of books. I really like the artwork, so charming.


Have a great VTT and a wonderful weekend.

The Honey Bunch Books looks like a perfect summer reading book for girls of any age!

I have some older books that I picked up at a sale - some are 'dated' in their ways of thinking, but it does show how beliefs have changed. One book I have to review is a story of an old sod house and the people that lived in it back when...it should be educational, even though it is for young adult readers.

Well that Honey Bunch sure leads an exciting life! Oh, you just can't beat the illustrations from the old books. I love the picture on the jacket of the second book. Those old books are all little works of art to me!

The Honey Bunch illustrations are so cute. I never read any of those stories. I read a lot of Nancy Drew books, but I always checked them out of the library.

I remember Honey Bunch books! Oh that's so wonderful to see! I didn't realize they were that old though. Thanks so much for the good memory jog!
Happy VTT
Cathy

I did not know the Honey Bunch series but it would have been read by me in my younger days. The illustrations I find beautiful.

Old books are so cool, I have not
heard of Honey Bunch books before.
Happy VTT! :)

I adore old books..the first one in your post is just darling. Little Honey Bunch is too cute.

The artwork in that Honey Bunch book is wonderful!

I love vintage books but I haven't read all of mine. Kudos to you for taking the time to delve into it!

What adorable books. I am book lover so these were very impressive. Nice post today. Also, happy you could drop my post today.

I love the Honey Bunch illustrations!
I'll have to keep these in mind when I go out looking...

I have never heard of the Honey Bunch books, either. I love old books, though, especially childrens books.

Those Honey Bunch illustrations are so adorable! And I like the picture from the other book, it's kind of mysterious. I like that you gave us so much history of the stories.

Oh, wow -- I haven't thought of Honey Bunch in years. Yes, she did have amazing adventures ... way out of the reach of most of us!

The artwork is wonderful...and I know I would like the books as well. I always loved the Cherry Ames books best when I was growing up. I wonder if the library still has any??
Happy VTT and have a lovely weekend.

Oh I never knew Honey Bunch but wow! What cool adventures she seemed to have. I lived vicariously through Pippi and the South Seas :)
The b&w illustration is magnifique!

i LOVE those old books and the illustrations are simply GORGEOUS :)

More wonderful vintage books, Miri, this series I don't know-they may have been peculiar to US. & never made it DownUnder!

I just love the illustrations fromthe 20's and 30's. VERY sweet book that first one. I think you and I have virtually the same tastes. :-)

Love the artwork in your books. Never heard of Honey Bunch.