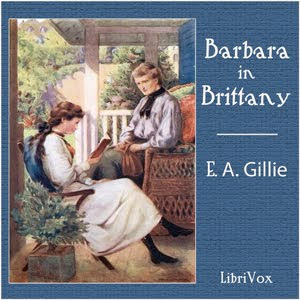 Barbara in by E.A. Gillie

This 1905 young adult romance is a delightfully sweet book. Young Barbara Britton is given the chance to go to to study by her Aunt Anne, Barbara late father’s rather severe sister. While Barbara is sorry to leave her mother and her younger brothers and sisters, she’s excited by the idea of travelling. First, she and Aunt Anne spend two weeks in (where they have Barbara’s first adventure) and then she is off alone to to study to improve her French. She stays with Mlle. Loire, who lives with her sister Mlle. Terese, and a niece, Marie. The description of the ladies and how they act towards each other is hilarious. (There’s quite a bit of good natured “poking fun” at the French here - everything from food to fashion.)

Barbara does quite a bit of touring with Mlle. Terese and manages to have quite a few more adventures…not the least one-meeting a young American, Denys, while out bike riding. I especially enjoyed how Barbara’s liking him began with simply being able to speak English to him! It turns out that Denys has been raised by his uncle, Mr. Morton-an old beau of maiden Aunt Anne’s…can you guess where this is going? 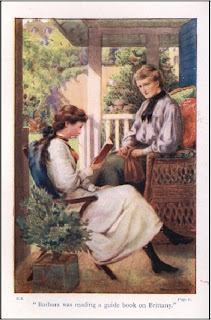 Running from the rising tide. (I told you she has adventures!) 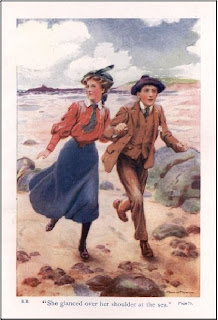 Denys with Donald and Frances, two of Barbara's siblings who totally approve of him. 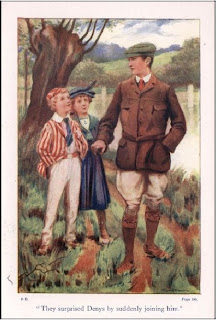