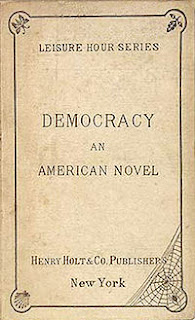 Mrs. Madeline Lee, a young widow who lost both her husband and child within a week of each other, had been living in . She tried to find meaning for her life in good works and philosophical studies but was still terribly sad and restless. Moving to , she wants to understand what makes government “tick”. She quickly meets Senators, Ambassadors, lawyers and lobbyists. (Yes, there already were lobbyists!) Her home becomes a sort of “salon”.

Mrs. Lee becomes particularly involved with Senator Radcliffe of , a powerful man in Congress with his eye on the Presidency who is generally thought to be a bit “rough”. Mrs. Lee has a distant relative in Washington, Mr. Carrington, who befriends her and tries to guide her.

I can’t say I enjoyed this book-it really is very wordy in that 19th century way-but more importantly, the ideas (as intended) evoke disgust. I do think it is worth reading however. It raises questions that are important and touches on issues (campaign finance for one) that are as topical today as when this book was written. I liked Sybil and Mr. Carrington. They are definitely the most naturally rendered characters.

Read by Nicholas Clifford, you can download this free audio-book here or the free e-book in pdf. or Kindle format here.

I thought you might enjoy these photos of Henry Adams...the first is dated 1875 and the second is dated 1858 when he graduated from Harvard. 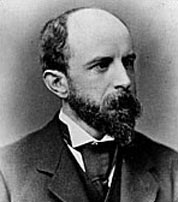 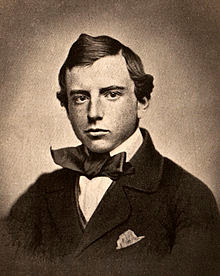