Tuesdays Tomes: The Middle of Things by J.S. Fletcher 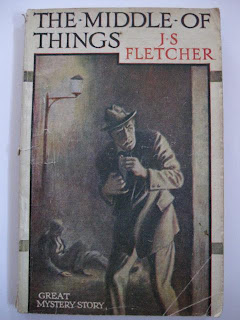 The Middle of Things by J.S. Fletcher

As I read this mystery, my mind kept thinking about that old TV show “Murder She Wrote”-I was sure the mystery writer’s name was Fletcher. In fact her name was Jessica Fletcher or J. Fletcher! Aha! As prolific a writer that Jessica Fletcher was, J.S. Fletcher has her beat. He wrote over 100 detective stories!

In the Middle of Things, Mr. Richard Viner lives with his maiden aunt, Miss Bethia Penkridge in , Bayswater. She likes it when he reads to her of an evening and her favorites are always crime stories.

“What she loved was a story which began with crime and ended with a detection--a story which kept you wondering who did it, how it was done, and when the doing was going to be laid bare to the light of day. Nothing pleased her better than to go to bed with a brain titivated with the mysteries of the last three chapters; nothing gave her such infinite delight as to find, when the final pages were turned, that all her own theories were wrong, and that the real criminal was somebody quite other than the person she had fancied.”

I totally agree with Miss Penkridge-don’t you?

This fun beginning sets up the story quite nicely. After the evening’s reading and once his aunt had gone off to bed, Mr. Viner enjoyed nothing more than a late evening’s walk about the neighborhood. On the night we first meet him, his walk ends with something terrible. He’s quite near home, by a narrow alley, when suddenly a man comes running out! A man he vaguely recognizes! Mr. Viner enters the alley and there, under the single street light, finds the body of his new neighbor-Mr. John Ashton-dead! Stabbed!

Well, the police come and Police Inspector Drillford asks Viner to go with him to break the news of John Ashton’s death to his young ward, Miss Wickham and her companion. Soon a man is arrested but when Viner goes to court for the hearing to testify to finding the body and he sees the accused he realizes that he does know the man: the fellow attended school with him. He’s certain that he can’t be the real murderer and that there must be some mistake and takes it upon himself to find out the truth. (He is totally in the middle of things!) And yes, he-with the help of his aunt and a broken typewriter letter-does!

I thoroughly enjoyed this 1922 mystery and had a good chuckle at the rather contrived romance at the end but as they say, “All’s well that ends well”!

Read by Kehinde, you can download this free audio-book here or the free e-book in pdf., e-pub or Kindle format here.