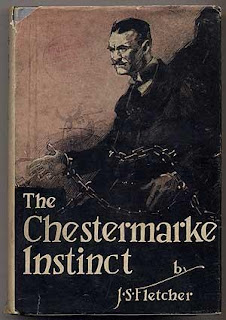 The Chestermarke Instinct by J.S. Fletcher

John Horbury, bank manager at Chestermarke’s bank in the small English town of , walks out of his house one Saturday evening and disappears. His ward and senior clerk at the same bank, Wallington Neale, cannot imagine where he has gone to and worries that he has had an accident. When Gabriel and Joseph Chestermarke, uncle and nephew and owners of the bank. declare that securities are missing, Neale refuses to believe that Mr. Horbury took them and fled. When Lord Ellersdeane arrives at the bank and asks the owners to please give him his wife’s jewels that he had left with Mr. Horbury, they insist that not only are there no jewels but that they know nothing about any jewels being deposited for safekeeping with the bank and since Lord Ellersdeane is not a regular customer of the bank, the bank is not responsible. When he gave the jewels to Mr. Horbury, it was a personal transaction with Mr. Horbury, friend and not with Mr. Horbury, Bank Manager.

Neale and even Lord Ellersdeane do not believe that Mr. Horbury took the jewels as well as the securites and fled. Only the bankers do.

When lovely, independent Miss Fosdyke, Mr. Horbury’s niece arrives as she and her uncle were to begin their vacation trip together and discovers her uncle is missing, she has no patience with her uncle’s employers. If they don’t want to call in the police “just yet” as they are more worried about a possible run on the bank when word gets around that the Bank Manager is missing, well she does. She too does not believe any rubbish about stolen securities and is simply worried about her uncle.

This is a rousing good mystery with lots of questions, a few clues, a tinker, a moor to roam around in, a Scotland Yard detective and a bit of romance. And best of all, it was kind of fun to read a book in which the bankers are clearly somehow off. I’m not going to give anything away but believe me when I say that every character in the book is sympathetic except the bankers!

Charmingly read by MaryAnn (at one point, you can hear her children in the background :), you can download this free audio-book here or the free e-book in pdf, ePub or Kindle format here.