Tuesdays Tomes: A Gothic Romance: The Thing From the Lake by Eleanor M. Ingram 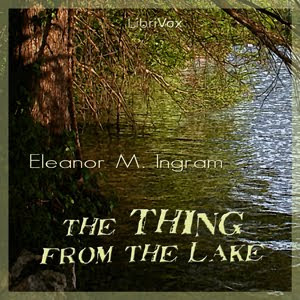 The Thing from the by Eleanor M. Ingram

“The Thing from the ”-does the title make you think of a 1950’s Roger Corman film? It did me but in truth this delightful 1921 story is more romance than horror.

Roger Locke, a composer of popular music and Broadway shows, decides he needs a country house as it is too hot in to work during the summer.

“There, Mr. Locke, is a bargain,” the agent called back to me, where I sat in my car.

I nodded, surveying the house with an eagerness of interest that surprised myself. A box-like fairly large structure of commonplace ugliness, it coaxed my liking as had no other place I had ever seen; it wooed me like a determined woman.”

He of course buys the house…indeed, he decides that he wants to sleep in it that very night -a bit of “camping out” in the partially furnished house. He gets a bit of a surprise. He’s suddenly awakened during the night. A woman is in his room-she tells him a tale of magic, witches, death and evil-and slips away as mysteriously as she entered.

Locke leaves the next day for New York, after contacting various workmen to set the house to rights.

His cousin, Phillida, has been called home from college by her parents-to be berated for not doing well in her exams and he has agreed to meet her at her train and travel home with her. When her train is late, he calls her parents and telling a small fib says that her train will arrive too late for the connection and that he will take her out to dinner and home later. When he meets Phillida and sees how downcast she is, he offers to let her choose the restaurant. She surprises him by stating she wants to go to a nightclub with an ice dancing show.

There she really surprises him: she introduces him to her secret husband, Ethan Vere, one of the ice dancers. Roger is shocked but he realizes that Phillida has not fallen for some fly-by-night and that Vere is a serious young man who grew up on a farm in and took to ice dancing as the only way he could make a living after returning from the War and that he loves Phillida deeply. Roger offers them the management of the farm and house in so they can finally begin their married life together. What he doesn’t realize is that he has won a valuable friend in Vere.

Soon it is summer and Roger Locke is up at the house with Phillida and Ethan. ..and the mysterious woman! Who is she and why does she whisper to him to leave the house.

Bright and sunny by day, mysterious doings and chills by night, this Gothic Romance is very entertaining. I thoroughly enjoyed the last chapter-a chapter with an alternate explanation for all that has happened throughout the book! Eleanor M. Ingram wrote several novels-I’m definitely going to read another and I'll report back.

Wonderfully read by Roger Melin, you can download this free audio-book here or the free e-book in pdf., e-Pub, or Kindle format here.

This sounds good. I have added this to my elibrary. Look forward to reading. Thanks.