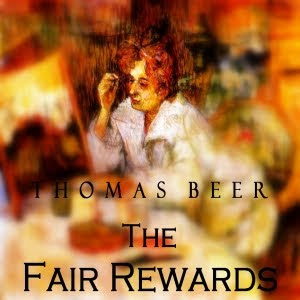 The Fair Reward by Thomas Beer

This 1923 novel gives us a look at the American theater from the end of the 19th century to the 1920s while telling us the story of Mark Walling: actor and producer. Mark is a truly sympathetic character and as we follow his life story, we can’t help but be moved by him…something we wish to shake him and tell him to wake up.

As the novel begins, we are introduced to Mr. John Carlson, producer of an imported play, Nicoline. He’s nervous about the opening. Mr. Fitch tells him not to worry.

“This’ll be a hit. It’s been a hit in and . The critics-the adapter smiled- won’t dare say anything worse than that it’s immoral. And Cora Boyle will make them laugh in the third act, so that’ll be safe.”

“Boyle? Who’s she? That black headed gal that plays the streetwalker, y’ mean? She’s no good…Common as dirt and no more sense than a turnip.”

And so we meet Cora Boyle. She and Mark Walling are a young married couple when the book opens-it is she that has gotten him into acting and a small part in the play.

Mark and Mr. Carlson eventually become partners in producing plays with quite a bit of success. And Cora…well, I’ll leave that to you to find out when you read this very interesting novel.

A 1922 review in the New York Times just stopped short of calling this novel brilliant. “…it has style and sophistication and personality, intermingled with a truly vivid show of imagination. It even borders on brilliancy…”

Read by Greg W., you can download this free audio-book here or read it on-line here.