Tuesdays Tomes: The House by the Lock by Mrs. C.N. Williamson 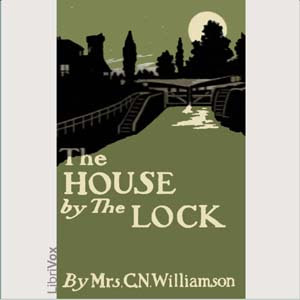 The House by the Lock by Alice Muriel Williamson

Do you believe in love at first sight? I have to confess that I sort of do. Three days after meeting my husband, I told my sister that I would marry him-we’re married 33 years and still counting.

Noel Stanton, an adventurer and travel writer, has just returned to from one of his adventures looking for a taste of home and a bit of quiet. He heads off to the theater and while at the box office meets an acquaintance from his travels in the U.S, Mr. Harvey Farnham of . They sit in adjacent stalls and before the curtain goes up chat.

“Farnham explained to me that he had “run over” to on business, intending to sell a certain mine of his, which though vastly profitable, was the one thing in which he had lost interest.

‘I’ve had a good offer’, he said; ‘indeed, I’m visiting the house of the man who has made it—a wonderful fellow, only one degree, perhaps, less interesting than you. His name is Carson Wildred.’”

Farnham explained that one of the reasons he came to the theater that night was that Carson Wildred had a previously made engagement to see the performance with some friends and he was extremely curious to see the woman whose beauty Wildred had been praising for days.

“’There’s Wildred and his friends just coming to the stage box. By Jove! what a pretty girl!’

I looked up, because I was sure the volatile American would give me no peace until I had done so; and then, having done so, I completely forgot the play…never I have I looked on a face so radiant, so bewildering.

And so by page 10, we’ve met all the major characters and already I liked Stanton and Farnham and was suspicious of Carson Wildred to whom had a visceral and disgusted reaction…he felt he knew him from somewhere but the memory is allusive. And Miss Cunningham? Well, not having fallen in love with her myself at first sight, she’s still a mystery.

I like books that immediately get me into the story and combine romance and mystery. This book has an added allure. Written by a woman and published in 1906, there are many little peeks into what was considered propriety and convention in the relationships between men and women. Sometimes, these comments were so unexpected that they brought me up short.

Read by the always wonderful Roger Melin, you can download this free audio-book here or the free e-book in pdf, ePub or Kindle format here or read it on-line here.ue