I purchased this outline embroidered Bonnet Girl summer coverlet on E-bay a few years ago…yes, it was a bargain-it cost me all of $10.00! I’m not sure when its from but I would guess the 1960s, mainly because of the brown fabric…course the orange could mean the 1970s. Its technically not a quilt as there is no batting. 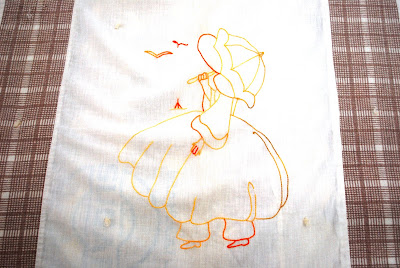 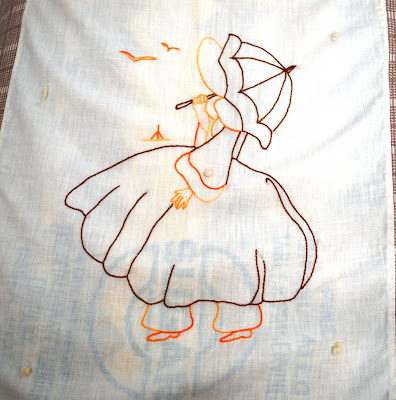 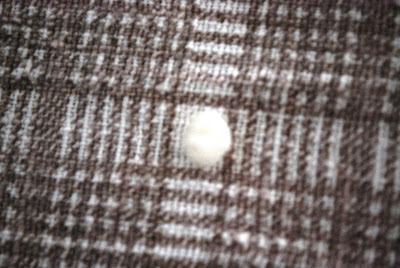 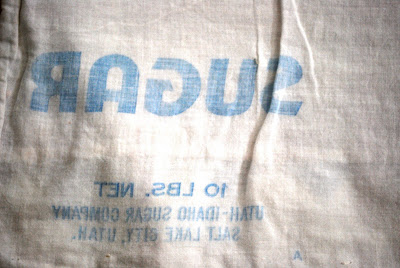 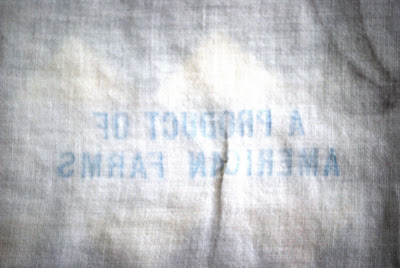 I love this quilt…I love the woman who made it! She took sugar sacks and a bit of floss and made a summer spread-I like to think- to dress up her daughter’s bedroom.
I like this Bonnet Girl so much that I have traced the design and started embroidering my own blocks-I’ll show you two later this week and I’ll share the tracing so if you like Bonnet Girls as much as me-stop back!
Be sure to hop on over to Coloradolady and see all the other vintage treasures being shared today on Vintage Thursday Thingie!!

Your love for this sweet quilt is
everywhere in this sugary wonderful post. I am happy I am not the only
person who enjoys researching my
treasures. It's so much fun right?
Happy VTT! :)

We lived in Idaho for 3 years back in the late 1970's and there were sugar beet farms all over the place! Potatoes too. I remember seeing a lot of the sugar sacks - like the flour sacks from the 1880's and early 1900's.
Karen
http://karensquilting.com/blog/

Thanks for the interesting history about the sacks. Back then, you used whatever you had. Times wee hard.

Lovely! thanks for sharing. "manipulations in the commodities markets".... I guess this has been happening for awhile!

What a great quilt, with so many interesting things! I love the little pop-ups from when the wool shrinks, my mom had something that did that when we were kids.

Both sides of the quilt are interesting.

A Collector At Heart said...

I just love your quilt and what a great e-bay buy! The history of it is just wonderful!

The 'back' story is fascinating and the coverlet is amazing and my word verification is 'patcha' appropriate for a quilt post, huh!

i loved reading your post, Miri, i was totally engrossed..i love those sweet little sugar sacks!..what a sweet quilt/coverlet..i love the design and i look forward to seeing your stitchery :)

What a neat quilt and a great post, Miri. I had no idea the yarn ties would turn into balls after washing. I love how the quilter used what she had to make this. There is an old building along the 55 (freeway) and I'm pretty sure it used to be a sugar beet factory. Instead of tearing it down like they do nearly every old building here, I think they turned it into a hotel. I'll have to google it and see what ic an find out.

Funny that you posted your beautiful, homey, warming quilt this week, since I posted old transfer patterns I found...Great vintage Thingie lovers think alike.. I live on property in Salt Lake City that use to be some the Mormon churches sugar beet farms located west of downtown..

Your quilt is a treasure I have not seen the like of it Miri.

What a wonderful coverlet! I love that she used what she had to make something beautiful.

A truly sweet quilt. Your background information made it so much more interesting.

I bet it's OLDER than the 70's. I don't think sugar was still coming in cloth sacks then - - - in fact I KNOW it wasn't since I graduated from HS in '72 and started housekeeping in '75.

I love those little girls. I have patterns for them somewhere but just never got around to making them. Better find them, that would be a good winter project. :)Bea

what a sweet quilt. Made from sugar sacks. That is so cool!

Interesting story behind your treasure...thanks for sharing:)

What a cute quilt, and what a great informative post. I really enjoyed this one! Have a great VTT and a wonderful weekend.

You are very lucky to own such a wonderful quilt and it must be fun to "copy" the stitchery..
Have fun.

Sugar sacks. How beautiful. It's so much more precious than anything one could possibly buy today.
I love it :)

I love a treasure with a history and a history lesson! Thanks!

What an awesome deal you got on your a neat quilt. Thanks for sharing.