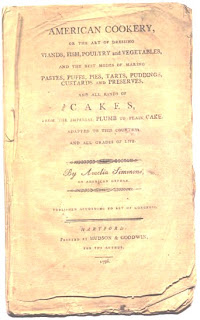 This is an absolutely wonderful book and a peek into American life- and not just what they were eating- right after the Revolutionary War. It was the first cookbook ever to include such American foods as Johnny cakes, Indian Pudding and Pumpkin pie.

The first chapter, like many old cookbooks, is “Directions for …the procuring of viands.” There are 7 different kinds of peas listed and 9 different kinds of beans including six week beans, lazy bean and frost bean (makes you wonder doesn’t it.) But this isn’t just a list of what’s in the garden or the larder…here’s what she says about apples.

“There is not a single family but might set a tree in some otherwise useless spot, which might serve the two use of shade and fruit; on which 12 or 14 kinds of fruit trees might easily be engrafted, and essentially preserve the orchard from the intrusion of boys, etc. which is too common in America. If the boy who thus planted a tree, and guarded and protected it in a useless corner, and carefully engrafted different fruits, was to be indulged free access into orchards, whilst the neglectful boy was prohibited-how many million of fruit trees would spring into growth-and what a saving to the union. The net saving would in time extinguish the public debt, and enrich our cookery.”

When was the last time you read a cookbook that had a suggestion on how to extinguish the public debt! and make boys behave!

When you do get to the recipe section, Amelia Simmons gives the recipes that Americans wanted and that weren’t available in any other cookbook. She gives 4 different stuffing recipes for turkey.

I don’t think there’s any easier recipe anywhere than her potato stuffing. “Boil and mash 3 pints of potatoes (I’d guess about 6 cups), wet them with butter, add sweet herbs, pepper, salt, fill and roast as above.”

There are 3 different recipes for A Nice Indian Pudding and two for pumpkin that are baked in a crust…sounds like pumpkin pie to me.

Besides these first-time-in-a-cookbook recipes for pumpkin and corn meal, there are 5 recipes for gingerbread, and even a recipe for Spruce Beer.

So if you like to read cookbooks, this is really a very special one. I’m not sure you could make much from it-unless you know what a gill is and you’re prepared to make emptins-for which there is a recipe- and which seems to be the key to many cakes.

If you’d like to take a peak at this wonderful bit of , it’s available as a free e-book in pdf. or kindle format here. A facsimile edition published in 1958 and called the First American Cookbook is available at Dover Books.

I’m linking to Weekend Cooking-a weekly Saturday party at Beth Fish Reads...so if you like cooking and cookbooks, hop on over-there will be lots of interesting posts and reviews of new cookbooks (but yes, you have to wait to Saturday! :)

I also want to tell you about a book give away at Books and Quilts. No, its not a cookbook...maybe even better-its Rock and Roll! Yes, Heather is giving away a copy of Why AC/DC Matters by Anthony Bozza so hop on over and check it out.

I love the early cooking references. My husband is always trying out Rev War and Civil War recipes.
Margaret

oh it's so lovely to see that coverlet again, CC would have loved it :) x

I really love to look through old cookbooks. The household tips and advice to mothers and wives are always fun to read. Since this is available as an eBook I will be checking it out.

My mom recently gave me her copy of this book. I have yet to read it but now I'm putting it closer to the top of my list. I enjoy reading about how people cooked, ate and lived in times past.