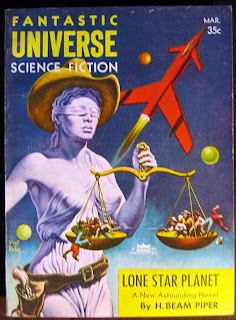 Lone Star Planet by H. Beam Piper and John J. McGuire
This is a humorous short science fiction novel…now I know that science fiction isn’t for everyone (I personally love it!) but this little book is really more silly than scientific. First published in Fantastic Universe in 1957, in 1958 it was published as a book with the title "A Planet for Texans" but when it was published as a part of a double book with Four Day Planet in 1979, it was once again under the title "Lone Star Planet".
You may have guessed already by the title that this planet was settled by Texans. When it became possible for human beings to leave earth the State of Texas decided to move lock, stock and barrel to this planet…yes, even including taking the Alamo with them.

Now it's generations later and a new ambassador from the Solar League has come-mainly to warn the New Texans of an imminent attack by the s'Scrauff-a canine descended group of space villains and to try to find out what really happened to the previous ambassador-was he murdered and by whom? Will he be able to convince the New Texans of the danger and the need to return to the earth fold?
Well read by Mark Nelson, be warned this may have you either chuckling or groaning out loud.
You can download this free audio-book here or the free e-book in pdf. or kindle format here.
This Lone Star quilt hangs on our living room wall...lol! yes, behind the TV! 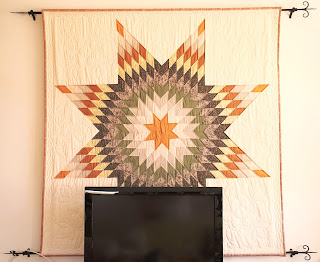 The corner design is a Rose of Sharon, the border design is a tight cable and the star itself is outline quilted. This quilt is hand quilted and is one of the last quilts I did using a polyester batt. It has been on the wall for years and still looks pretty good. 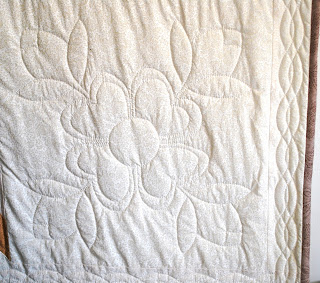 I'm not at all into sci-fi, but I love your beautiful Lone Star!

Oh wow this is amazing! Wish it lived at my house:)
Terry

I made a lone star years ago too Miri & it used to hang on the wall but now it is rolled up in the closet! The Rose Of sharon quilting is very nice.

That's a beautiful quilt. I thought of you this week when I was digging through a box of interesting old books. I only wanted a couple, but you had to buy the whole box. I left it there. Kinda wish I'd picked it up now.