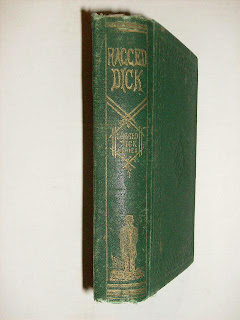 I’ve always heard of Horatio Alger’s rags to riches stories but had never read any of his books and I was very curious what exactly he said that became such a part of American culture. Ragged Dick, published in 1868 was his first book in the rags to riches formula…he went on to write about 100 more!

Young Dick, orphaned since the age of 7, is 14 when we meet him…uneducated, homeless but honest and earning his own living as a book black or shoe shine boy. He gets 10 cents a shine, earns a fair amount each day and spends it all before the next morning.

“Seven o'clock! I oughter've been up an hour ago. I know what 'twas made me so precious sleepy. I went to the Old Bowery [a theater] last night, and didn't turn in till past twelve.

‘You went to the Old Bowery? Where'd you get your money?’ asked the man, who was a porter in the employ of a firm doing business on . ‘Made it by shines, in course…’[said Dick.] "Some boys get it easier than that," said the porter significantly. "You don't catch me stealin', if that's what you mean," said Dick. "Have you got any money to buy your breakfast?’ [asked the porter]. ‘No, but I'll soon get some.”

Things may have continued like that except that Dick (called Ragged Dick as you may have guessed because of his clothes) meets a boy about his own age but Frank is from quite a different background-a young gentleman, Dick takes Frank on a tour of the city-more about that- and Frank gives Dick some new clothes and some new ideas. Frank awakens in Dick ambition-not a mean sort of ambition but the desire to better himself and we follow his adventures as he does just that.

There were several things I really liked about this book- one, the strong emphasis placed on getting an education (almost everyone who takes an interest in Dick suggests he get an education), two, how generous and kind Dick is towards his fellow boot blacks, and three the wonderful description of NYC! My only real fault is with the contrived ending.

You can download this free audiobook here or the free e-book in pdf. or Kindle format here.

Having lived in NY I just loved the descriptions of the mid 19th century city-the downtown area from Broadway to Wall Street and back up to Union Square and even further to . 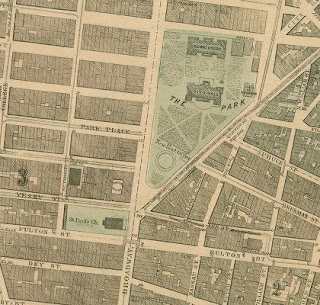 I never knew that a fountain had been constructed in to celebrate the opening of the Croton Aqueduct (bringing fresh water from upstate into the city.) Here's a photo of the fountain...today the park is best known for its Farmer's Market. 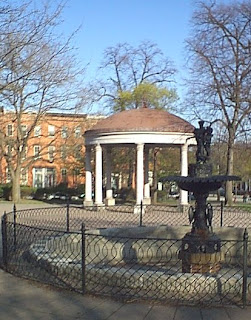 Here's a view of Trinity Church...now surrounded by tall buildings. 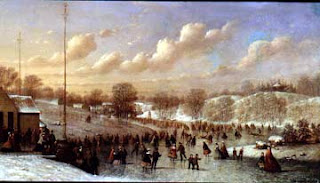 I've seen the name Horatio Alger but nothing more, how nice to find out something on him and his work, 100 books is a major achievement. On the History Channel the other night I watched a program on NYC. It started from the very beginning and talked much on the foundation of the streets called the grid--very interesting.

Very interesting, i to have heard the name but had no other information. Thanks for doing all the "home work".
Also, so glad you signed up for the GIVE AWAY! I thought of you when i posted the vintage kitty and was hoping you jump in for a chance to win!
I've never done a give away but so far, piece of cake, all i have to do is sit back and watch:)
Terry

I love old books and enjoyed your review of this book. Maybe I'll look it up and read it!!

What an interesting post. You've definitely made me want to read this story. I live on Long Island and I also love the descriptions of old NYC.