Today I'm sharing a sort of "double vintage" treasure...this 1977 State Capitals Quilt Blocks book from Dover is composed of patterns collected by the editors from the 1916 Hearth and Homes Magazine series.
Hearth and Home was published from 1868 until 1933 and ran several quilt block series...their first and most famous was the State Block series that ran from 1907 until 1912. They simply asked readers to submit sewn blocks that they thought would be fitting representatives of their state. The editors then chose 48 blocks-one for each state. It was such a success that the magazine continued with an Outlying Possessions series followed by the State Capitals series.
This book is totally 1977...check out the little calicos used in the blocks on the cover... 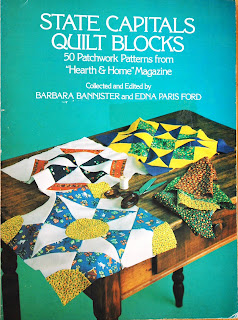 now this is much better...bright colors for the illustrated blocks on the front inside cover... 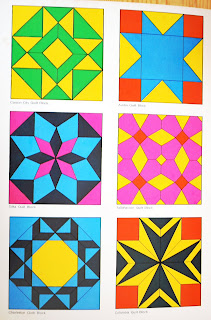 and the back inside cover! 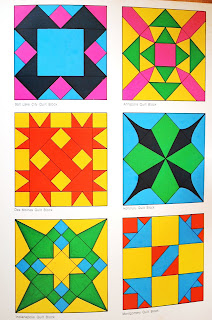 Some of the blocks have the original statements made by the women who sent in the blocks to the magazine...I particularly like the story that Mrs. L.W. Mathewson tells, "This design, pieced of blue and white, made a very attractive album quilt for a ladies'aid society, and sold for many dollars-everybody taking a share. The names of those who contributed were written on the white diagonal strip through the center, and outlined with blue marking cotton..." (Blue marking cotton would be blue embroidery floss or pearl cotton used to mark sheets with the owners names or initials). 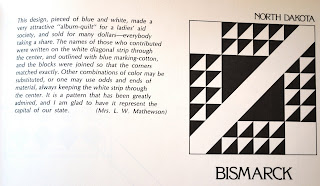 Now remember these blocks are from 1916 and the templates given are all for hand piecing...no seam allowances are included. This was also very often true in 1977 quilt books! :) All of the blocks are said to finish 12" and these were not simple blocks!
I just love this Tallahassee block...you can see it above in bright pink, orange and yellow...and it is not an easy block at all. C.H. sent in the block and recommends sewing the quilt with all pieced blocks...yes, it would be lovely-you can see from the drawing but oh, my not easy! 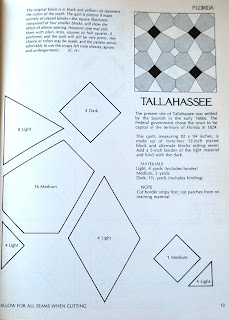 Hope you enjoyed the State Capitals Quilt Blocks and are maybe even a little inspired...anyone up for trying their state capital block, send me an e-mail and I'll send you the scan of your state's page.
For more vintage treasures, hop on over to Coloradolady...VTT's lovely hostess, Suzanne holds the key to all the wonderful vintage goodiness being shared this week.
Posted by Miri at 4:15 AM

It is funny how the time of publishing the book is so obvious when you see the colours and fabrics. The patterns seem quite complicated.
I have some marking cotton from my mother, and it is a little different from both perle cotton and embroidery floss.

Of course, I do not quilt. I do love them and have several. Some vintage and some new. These are wonderful books that any quilter would love to have.

great looking blocks - it is always nice to see how people quilting awhile ago and what patterns they used.
Karen
http://karensquilting.com/blog/

A bit of history here. Those 1970's calicos take me back - and not in the best way. I just don't like the fabrics from that time time period, even though I made my first quilts back then. thanks for sharing!

What a fun book! I'd love to try the WI block!

What a great book! That Tallahassee block was the one that caught my eye in the graphics. I love to hand piece but that looks pretty tricky.

Cool book, it would be nicely made using Civil War prints.