Tuesdays Tomes: Tarzan of the Apes by Edgar Rice Burroughs 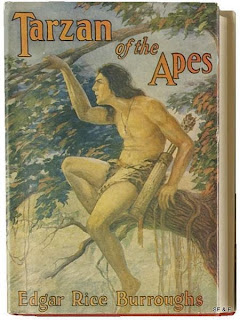 Tuesday Tomes is a weekly book review of mainly vintage books. If you’ve reviewed a book recently, send me an e-mail and I will link to your post.

This may seem like an unusual choice for me but I really loved this book. Growing up with the Tarzan movies (anyone else remember Million Dollar Movies on TV?) I thought I knew the Tarzan story…boy was I wrong.

The original story is so much more fascinating than the movie depicted Tarzan and begins by telling the story of Lord and Lady Greystoke, how they were put ashore on a deserted coast of African, how they struggled to build a home and family while waiting to be rescued and how they never were…dying in the log cabin home they had built and leaving behind their baby son.

The tale of how the baby Greystoke is raised by the Great Apes, finds his parents’ old log cabin, and yes, eventually meets Jane is simply spellbinding. I loved how Burrough’s doesn’t just provide adventures but explores Tarzan’s moral and intellectual growth.

I don’t want to give too much away but I will tell you that Tarzan never says, “Me Tarzan, you Jane!”

Delightfully read by Mark F. Smith, I thoroughly enjoyed Tarzan of the Apes-first published in 1912.

I went on to listen to all of the Tarzan books but no, I’m not recommending them-while I enjoyed them, they are not up to the standard of Tarzan of the Apes and are much more in the dime novel style.

You can download this free audiobook here or download the free e-book in pdf. or Kindle format here.

Here are some interesting facts about Edgar Rice Burroughs and his family.

He was descended from Edgar Rice, a settler of the Massachusetts Bay Colony who arrived in the colony in 1637 or 1638-about 18 years after the founding of the colony.

His daughter Joan married James Pierce, the actor who played Tarzan in the 1927 movie “Tarzan and the Golden Lion” in 1928 and they were married for 44 years until her death in 1972. They were the voices of Jane and Tarzan on the Tarzan radio program from 1932-34.

grew up around his ranch named Tarzana and was founded around 1927. (I actually have a cousin who lives in Tarzana-I never even associated the name with Tarzan!)

And of course any discussion of Tarzan would be incomplete without Johnny Weissmuller.

I've only read a couple of the old Tarzan books but when we were kids we would watch the old movies on Saturday or Sunday afternoons. They always seemed to play the Tarzan movies that had been made in the 40's(?) I think that is where my hatred of spiders came from - always seemed like there was a giant spider from in the jungle attacking people!
Karen
http://karensquilting.com/blog/

Book to the Future said...

I was *totally* waiting for that "Me Tarzan, you Jane" moment! The opening chapters describing the tragedy of the original Lord and Lady Greystoke are always skimmed over in adaptations - but their story is really quite touching.

Michelle
Book to the Future
www.booktothefuture.com.au

I read many Tarzan books growing up. Loved them! Edgar Rice Burroughs really brought the setting and characters to life. What a talent!

Thanks for the wonderful memory.

I loved Tarzan, watching it, that is, but never read the book. I may have to download that one.