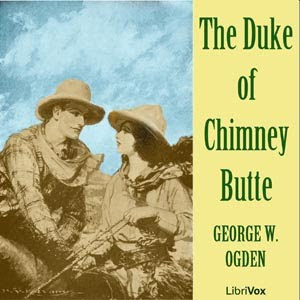 The Duke of Chimney by George W. Ogden

This cowboy romance is entertaining right from the get go and is a combination Western, comic novel and romance. Young Agi college graduate, Jeremiah Lambert decides “to make his fortune” and save up enough for a farm by being a peddler of the magnificent “All-in-One” gadget but things don’t go quite as he expected. His sales territory is the Bad Lands and after 15 days and over 500 miles, he’s sold just 7 - houses being very far apart indeed. He’s been reduced to walking-his bicycle! has a flat tire-when he comes across the cowboy camp and his future takes a different turn.

Leaving off selling the All-in-One, he joins up with the cowboys, wins himself a horse, makes both friends and an enemy and gets a new moniker: The Duke of Chimney Butte, usually shortened to just Duke. On Sundays, the boys like to go and race the trains…now they usually race the slower moving freight trains but not Duke, oh no! As he’s flying fast, he sees a young woman cheering him on from the train and waving a handkerchief. His horse speeds up even more and Duke gets his trophy-the handkerchief and a hankering to meet that lady. So off he goes, with his friend Taterlegs to follow the train line and try to find her.

I’m not going to tell you any more and you really need to read it to get all the humor of the bicycle, etc. but just let me say, there’s never a dull moment and there are not one but two girls: Vesta Philbrook and Grace Kerr!

Wonderfully ready by Mike Vendetti, he really has the perfect voice for a cowboy book, you can download this free audio-book here or the free e-book in pdf. or kindle format here.

The most disconcerting thing about reading vintage books is how racial slurs or epithets can suddenly appear. Here the author uses negative “racial” characteristics to portray one of the bad guys (he is part Native American) and has another bad guy utter racial slurs. What was he thinking? Was this an attempt to make them unsympathetic? But how so? We can see the utterer of racial slurs negatively but what about the author’s own use of racial stereotypes? Was he “just following convention” – i.e.,in a Western, the Indians had to be bad? I think I have to read more by this author and see if this comes up again.

BTW, The Duke of Chimney Butte was made into a movie a year after publication in 1921…no moss grew under young ’s feet-they knew a hit when they read one!

Downloading now, thanks! You're right, it's strange to come across racial slurs like that - really a shock to the system!