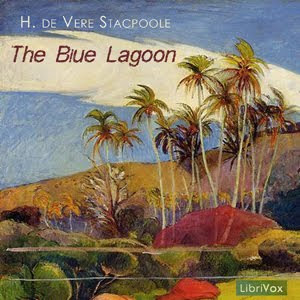 I’m not sure what’s going on here…I’ve never taken a long ocean voyage nor have I been to the South Seas but here I am reviewing another shipwreck story. This 1908 book is quite different from The Coral Island which was a simple adventure story; for here there are interesting philosophical asides and speculations on the nature of love, religion, and nature. The author, Henry Stacpoole spent more than 40 years in the as a ship’s doctor and his ruminations are thoughtful. One I particularly liked:

“Memory cannot produce a picture that Imagination has not retouched; and her pictures, even the ones least touched by Imagination, are no mere photographs, but the world of an artist. All that is inessential she casts away, all that is essential she retains; …She is a painter, but she is also a poet.”

The basic story is that young Dick (about 7), his cousin Emmeline (6) and his father are sailing to San Franscisco from when their ship must be abandoned due to a fire. They end up in separate boats, the children with one of the deckhands that had befriended them aboard ship while the father is with the Captain. The boats get separated with the children and Paddy eventually arriving at a small island (the father is rescued by a ship). I enjoyed Paddy, he is wonderfully portrayed and I think the most defined character in the book. I especially liked his way with the children and there’s a lovely bit about him making a new skirt for Emmeline.

We watch the children grow up on this island-no early rescue, no pirates -simply their daily life and how they deal with both the good and the sad that happens.

This highly intelligent book, wonderfully read by Adrian Praetzellis, can be downloaded as a free audio-book here or as a free e-book in pdf. or kindle format here.

LOL! Check out the last names and there’s one plot error at the end of the book-see if you catch it.

I listen to lots of audio books, Miri, reading for real at night for a bit before I nod off. I am currently the past couple of months engaged in a fascinating series by Diana Gabaldon, a local AZ author. I need to write about what I read & listen to because others are always searching for worthwhile reading matter!
So thanks for taking the time!