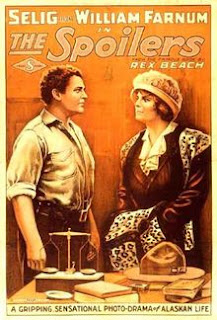 The Spoilers by Rex Beach

The Spoilers is a “bosom heaving” romantic novel and much more.

Dextry and Glenister rescue the beautiful Helen Chester from the men chasing her and hide her away in their room on the boat taking them back to and their gold mine on the Anvil Creek, The Midas, for the summer prospecting season. Roy Glenister falls hard for Helen but can he ever win her? Can she ever forgive him for:

Little does Glenister suspect that the woman he so deeply desires has had a hand in helping McNamara and her uncle, Judge Stillman, steal the Midas right out from under him and Dextry and by using the Law to do it. They put up a claim jumper to state that the mine was his (which they knew it wasn’t) and then said that the mine had to be put into the hands of a receiver (McNamara) while it was all sorted out. The gold was to be deposited into the bank for now but the only ones with rights to the bank account were McNamara and the Judge.

This is a true story! Well, I don’t know about the romance but the attempt to steal and control the Anvil Creek mines is part of the historical record. You can read more about this and the real scoundrels Alexander McKenzie and Judge Arthur Noyes here.

I enjoyed this rollicking story, both the romance and the intrigue. Rex Beach wrote this in 1906 just a few years after it all happened (he was in and witnessed all the shenanigans) but for us it’s an enjoyable historical novel. You may have seen the movie “The Spoilers” with John Wayne, Randolph Scott and Marlene Dietrich loosely based on the novel.

Perfectly read by Tom Weiss, you can download this free audio-book here or the free e-book in pdf or kindle format here.

For some wonderful photos of at the time of this story, click here and here.