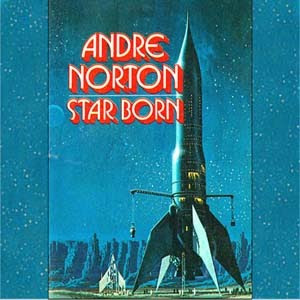 Generations ago a group of settlers left Earth seeking freedom and landed on Astra. There they met and were befriended by the MerPeople, a race that had been slaves to the Others and on gaining their freedom after the Others violent civil war lived in the seas and in coastal areas near the sea-still in fear of the Others.

Young Dalgard Nordis, a fifth generation settler, and his best friend, the MerMan, Sssuri, are on a trek to the northern lands.

About a hundred years ago, there was a political revolution on Earth (defeating the anti-science/anti space travel Pax) and now once again, man was taking to the stars.

Raf Korbi, small craft pilot, was waiting and hoping that they would find a planet to land on soon. They had been on this spaceship RS 10 for what seemed like forever and no one knew what their fate would be…no one even knew what had happened to most of the RS flights before them. Then the gong sounded-they’d made it-they had found a planet.

I loved the way this book was written-alternating chapters between the adventures of Dalgard and Sssuri and Raf and the Earthmen until of course, they eventually meet up. (Don't be put off by the first chapter and the many descriptions-its just setting the scene and no other chapter reads like that so stick with it.)

Lots of exciting adventures and there are some interesting insights into how people from different cultures evaluate their environment and how after all, evil reveals itself. For me, this book shows all the best of science fiction.

Pleasantly read by the always gentle voiced Mark Smith, you can download this free audio-book here or the free e-book in pdf. or kindle format here.

Andre Alice Norton wrote more than 300 books and stories. She was a tremendous influence on generations of science fiction and fantasy writers. She is probably best known for her Witch World series but she wrote many other series and singles. (Star Born, published in 1957, is technically the second and last book of the Astra series but it easily stands alone.) She was born Alice Mary Norton in 1912 and changed her name legally to Andre Alice Norton in 1934. She wrote mainly young adventure fiction and thought it would make her more marketable if her readers thought she was an Andre rather than an Alice! (This was not so unusual-I’m sure you can think of other women writers who adopted male names). I enjoyed this so much that I’ll be on the look out for more books by Andre Alice Norton.