Tuesdays Tomes: Jill the Reckless by P.G.Wodehouse- A Romantic Comedy

Tuesdays Tomes is a weekly book review of vintage books available free on-line.
Sorry I missed last week-I was worried that I wouldn't have much time to read while away so I wrote and scheduled a series of reviews but not enough. This past week, I went to NYC to see my daughter so I had a chance to listen to this hilarious book while on the bus...it got a little embarrassing when I'd chuckle out loud! 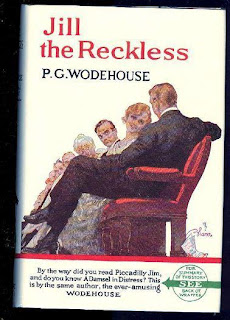 We first meet our heroine, Jill Mariner, at the theater. She is there with her fiancee, Sir Derek Underhill, MP, his disapproving mother and a childhood friend, Freddie Rook, when she strikes up a conversation with the man sitting to her left. The play is abysmal and the gentleman turns out to be the playwright! He's not only the playwright but another childhood friend...well, maybe friend isn't quite the right word-he used to put worms down her back. (A sure sign he liked her!)
Things go from bad to worse with Jill and Derek, under the undermining influence of his mother and her dislike for Jill's unconventional and independent ways (like talking to the man sitting next to her at the play!)
Derek breaks off the engagement and then Jill discovers that her dear Uncle Christopher has lost her fortune in a speculation. Well, what shall she do? In P.G. Wodehouse fashion-its off to America where Jill's adventures take a happier turn...she joins the chorus of a Broadway show and meets up again with her old "worm tossing" friend, Wally Mason.
I loved having a woman as the heroine of this hilarious Wodehouse tale from 1920 and as usual all of the characters are a riot. Wally is "to die for" he's so sweet but I think my favorite is the rather ridiculous Freddie Rook.
Adding to the fun is the reading by Don W. Jenkins for the audio book available for free download here or you can download the e-book in pdf. or Kindle format here.
Posted by Miri at 4:33 PM

This sounds like it would be a good summer read.

Ooooh! I'll have to check this one out. I love Jeeves.