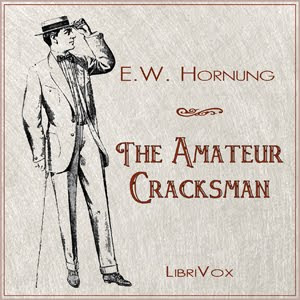 The Amateur Cracksman by E.W. Hornung

The amateur cracksman is A.J. Raffles…perhaps you’ve heard of him? He’s rather the antithesis of Sherlock Holmes: Raffles is the gentleman thief. (His connection with Sherlock Holmes is really quite close-E.W. Hornung was the brother-in-law of Sir Arthur Conan Doyle.)

Published in 1899, these are the first tales of the adventures of Raffles and his school friend and assistant, Bunny Manders. They simply are gentlemen without adequate means to support themselves who resort to burglary to make ends meet. Bunny has run through his inheritance and Raffles is a well known cricket player but as a gentleman he’s, of course, an amateur player. They take only enough for their needs although Raffles does dream of the “big haul” which will allow him to retire in comfort. Bunny is never very sure about burglary at all.

I enjoyed this series of short stories-each chapter is a separate tale. I suggest skipping Chapter 2-racist comments abound. The only real point of the story is to show that Raffles will never leave Bunny in the lurch.

Many Raffles movies have been made over the years. Most of them have little relationship to the actual tales except for the 1976 British Yorkshire Television mini-series, “Raffles”. (The 1940 “Raffles” starring David Niven is however charming!)

Beautifully read by Kristin Hughes, you can download this free audio-book here or the free e-book in pdf., e-Pub, or Kindle format here.

I thought you might like this: the author “reading” the opening of The Amateur Cracksman. Clever, isn’t it?