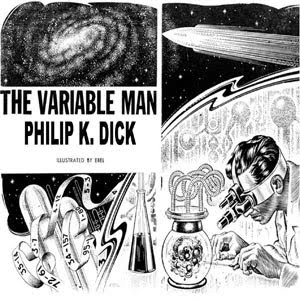 You may not have read many or even any short stories or novels by Philip K. Dick but I’m sure you’re familiar with his work. Blade Runner, Total Recall, Minority Report and this year’s Adjustment Bureau are just some of the films based on his stories.

The Variable Man is a very early story by Philip K. Dick, first published in 1953. (Interestingly, science fiction stories, usually first published in magazines, have entered into the public domain much sooner than other novels.)

The year is 2136 and Terrans are locked into their own solar system by the aging Centaurus Empire. On Earth, life is very well regulated and based on statistical prediction. Terrans are gearing up for a war against the Centaurus Empire-they’re just waiting for the statistical prediction that they will win. Security Commissioner Reinhart keeps a close on the predictions…he’d like nothing better than to give the go ahead for war. Peter Sherikov of Military Design is working on a new, fantastic weapon-one capable of reaching Centaurus faster than light speed but he’s having trouble wiring the control module. (He would love to be able to use the technology for faster than light speed travel rather than as a weapon but the last time it was tried-it exploded-hence the weapon.)

The year is 1913 and Tom Cole, a general traveling fix-it man, is sharpening a knife for the lady in the green house in exchange for a hot meal. Suddenly he and his cart and his two horses are picked up in what he can only call a “tornado”. When he lands-he’s no longer outside-he’s in the middle of a building and people in white coats-lab coats-are all staring at him. (He doesn’t know it yet but a research bubble from 2136 had gone back to 1913 in preparation for the start of WWI and had caught him when it was summarily brought back to 2136.)

Is Tom Cole, general fix-it man, the man to help Terrans break out of the hold of the Centaurus Empire and fill the galaxy or is he the statistical variable that makes prediction impossible?

As usual with Philip K. Dick, his prescience is where the fun really is. Here are two quotes to think about: “Nobody fixes things. When they break you throw them away.” And: “Too much knowledge has piled up in each field. And there are too many fields.”

Wonderfully read by Gregg Margarite, you can download this free audio-book here or the free e-book in pdf. e-Pub or Kindle format here. 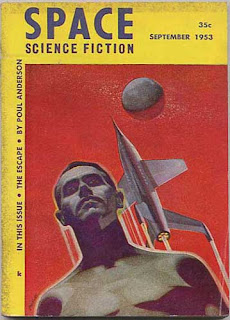 I had no idea that some of my favorite movies came from old science fiction novels, Total Recall was the best at throwing you in a loop. Once again, Miri, great review.