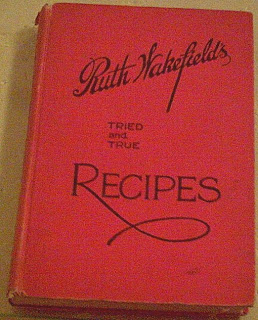 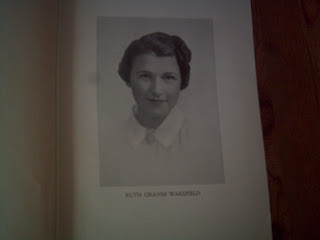 This is a special cookbook for me. It is Ruth Wakefield's Tried and True Recipes and is a sixth printing of the first edition of her famous cookbook (later called The Tollhouse Cookbook) from 1936-37 .

It was given to me by my aunt and Ruth Wakefield signed it on the front flap. 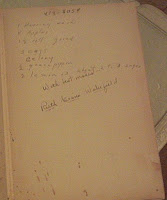 My aunt didn't seem to think too much of it-she wrote a recipe over it!
This is such an early edition, it does not have a recipe for Tollhouse Chocolate Chip cookies. I guess she invented them between this edition and the next (I think it came out in 1940). There are a lot of myths about how she came up with chocolate chip cookies-even on the Nestle site, they say she wanted to make chocolate cookies but was out of semi-sweet baking chocolate so she used a Nestle chocolate bar, breaking it into pieces and expecting it to melt in the batter. I find that rather silly: her recipe for chocolate cookies clearly states, melted chocolate-she would have melted the candy bar too. I think she was just a genius-she cut up the chocolate bar into her cookie dough to see what would come out.
She made a deal with Nestle: they put her recipe on the back of their candy bar and she received a lifetime supply of Nestle chocolate bars! It wasn't until later that Nestle began to make chocolate chips specifically for cookies.
There are a few cute drawings and lots of recipes that use pineapple! 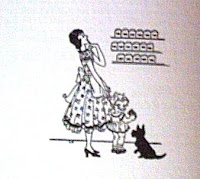 Yum! did you ever try the pineapple pie? I wonder if it's good?

I memorized the toll house cookie recipe when I was a little girl. That was my job to bake a double batch every Saturday morning, and Mom would pack them in our lunches all week.

Love that old recipe book...great reading about the origins of the choc chip cookie too :)

How neat that you have an autographed copy! It's even better since you have your aunt's addition to it too!

I love the cookbook. What a treasure. I loved you included a little bit of history about the cookie recipe. I did not know any of that....most likely because all I cared about was eating the darn cookies!

That is a very special cookbook knowing the history with it--how cute that your aunt wrote over the signature.

Great idea for VTT!
I have my Mum's recipe book all in her handwriting beginning in 1942!
Tell me it isn't so with the bias binding, I hate leftovers! Come to think of it I still have yards of purple BB left from a jacket I made for my Mum a good 15 yrs. ago-it's well aged now,LOL.
Roslyn

Oh WOW...what a wonderful cookbook...i have several vintage ones and they are the ones that seem to have the best recipes!

I love the story about how chocolate chip cookies were invented. It's always fun to know the story behind something famous. Thanks for the lesson.

Love the illustration from this wonderful old cookbook...and how cool that you have a signed copy?