This is a funny little cook booklet exclusively filled with recipes for fried foods! 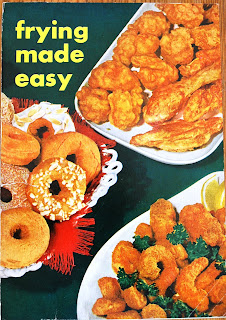 There is no date...but here on the back cover is the first clue: the lovely salt and pepper shakers say 1950s to me. 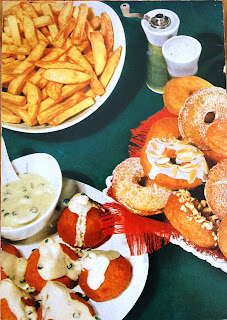 Finally, inside some of the mystery is solved. This is a booklet put out by Spry Shortening! No wonder its all fried foods! (There is another vintage Spry cook booklet dedicated to baked goods.) Now look carefully at the Spry can-do you see the checked or gingham pattern around the name? 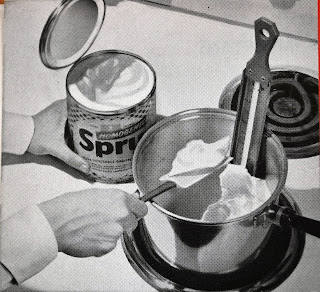 When Spry was introduced in the 1935-it was not in the blue gingham can. During WWII, Spry was not in a can at all-it was in a bottle…I’m guessing the metal was needed for the war effort. Both showed Spry written in green on a V shaped yellow background and both had the running baker holding a pie on the sides as the logo.

In 1951 out came homogenized Spry in a Blue Gingham can with a small running baker logo. "Homogenized" was only used in advertisements -not on the can.

“All Spry in the blue gingham can is homogenized” was the slogan.

In 1953- Spry in the blue gingham can now says across it: homogenized… exactly like the can in my cook booklet.

In 1955 a new can came out-no running baker at all-its the red and white can that I remember as a child. 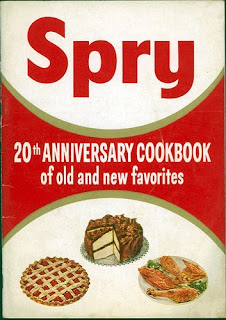 So now we know that my little "Frying is Easy" cook booklet is a Spry cook booklet from 1953-1954! Pretty good solution to the mystery. And what is inside? Mmm, doughnuts! 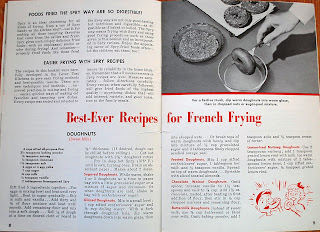 Bet you didn't know that frying (in Spry, of course,) was so digestible! "...foods like those fried the Spry way are not only good-tasting but nutritious and digestible-as digestible as if baked or boiled." Too bad we all believed this...can we blame today's obesity problem all on '50s advertising copy?
Fortunately not all the recipes look as good as the doughnuts...here's one of those super weird 1950s concoctions. This one, like all "...the recipes in this booklet were carefully developed in the Lever Test Kitchens.." 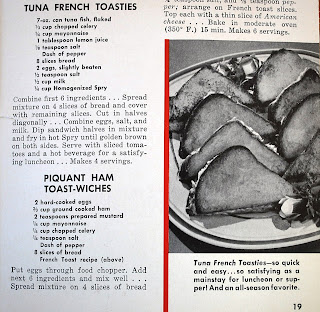 A tuna fish sandwich, dipped in French toast batter, and fried in Spry! Honestly-did they ever taste the things they made! Though I have to say that if you were going on a breakfast picnic, the other filling might just fill the bill.
If you have a Blue Gingham Spry can-or you find one-what a fabulous rare find it is. After all, the Blue Gingham can was only produced for 4 years, from 1951-1955!
Hope you enjoyed my "Frying is Easy" cook booklet. To see more wonderful vintage treasures, hop on over to Suzanne at Coloradolady-the hostess with the mostess of Vintage Thursdays Thingies and the keys to wonderful vintage treasures. I'm also linking to Week-end Cooking at Beth Fish Reads.
Posted by Miri at 10:13 AM

Those old cookbooks sure didn't promote health, did they? LOL Just good, tasty food! What an interesting history of the product. I've never heard of it before. Grew up w/Crisco! Thanks for visiting today. You are a very accomplished quilter, looking at the items I've seen in your past posts.
:-) Sue

Fried foods were all the thing many years ago and still are good - just not healthy. You will probably find some very good recipes in it.

wow Miri, what a fabulously informative post, i was intrigued to say the least..must say i've got the hungers real bad now lol!

thanks also for visiting and leaving your lovely comments :) x

Donuts are digestible and nutritious! Who knew?

Thanks for all that wonderful vintage information. Your can is wonderful!

As for the tuna sandwhich...thanks but no thanks!

They sure came up with some yucky recipes.

OMG, as bad as frying is for your health, this is making me hungry. I guess it is safe to look at the pictures. Any greese stains on the pages?

The Charm of Home said...

What a fun post. I love old cookbooks published by the food producers!
Have a great weekend!
Sherry

Nothing like a warm donut - yum. I'm not going to try the fried tuna sandwich though. It's no wonder that one never went over well.

That is a great vintage cookbook! Have a great 4TH!...Julian

What a fun find! I love those old cooking pamphlets!

I really enjoyed your history lesson on the can and cookbook. Great photos this is an excellent post.

I love those old advertising recipe booklets because the are fun to look at. The food all sounds awful (except for the doughnuts). I think I might have a Spry booklet, but not like yours.

Hmmm love donuts but not too healthy! People did not get get obese in the 50's, it's more in the last 20 years. I wonder what is different.
Happy VTT anyway.

What a fascinating bit of history!

I have never seen a booklet from Spry.....what a neat little book! And the donuts look wonderful! Have a great VTT!

I can feel my arteries clogging up just looking at this fabulous booklet! Not that I have anything against fried food mind you - I only walked by the deep fried oreos at a fair this weekend because it was 90 degrees.:) Happy 4th!

I found my Spry booklet. It has the green and white can. It is hilarious! Maybe I'll put it on VTT soon.

Wow, you really did some research!

I enjoyed seeing the cookbook!
Thanks!
Micki

I love looking through those old brand-name booklets. Some of the recipes are cringe-worthy (French toast tuna?). I am so impressed with your detective work to get the date down. The photos alone look fifties, don't they?

Thanks so much for linking up and for this great post. Now I feel like flipping through some of own flea market finds.

I love looking for these little cookbooks when I go to antique stores. I have a handful of them now.