This etching, a portrait of Leo Baeck by the Israeli artist Yehuda Bacon, is DH's. In the lower left hand corner of the etching you can see Bacon's etched signature... 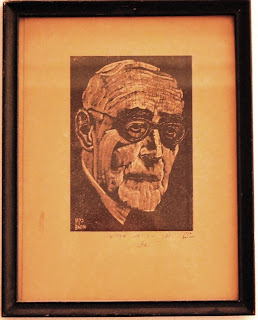 and in the margin on the right, below the etching, his actual signature. To the left of that is written in Hebrew "To Danny"...yes, this is a dedicated, signed etching to DH!

Yehuda Bacon (1929-), a Holocaust survivor, is still an active artist at age 81. His works have been exhibited in museums all over the world.
Leo Baeck (1873-1956), a prominent Reform Rabbi in prewar Germany, went to England after liberation from the Theresienstadt concentration camp. He later became Chairman of the World Union of Progressive Judaism.
To see more vintage wonders, hop on over to Coloradolady-our gracious hostess and holder of the key to many vintage treasures.
BTW, scroll down to my previous post for some embroidery transfer patterns of vintage cars!
Posted by Miri at 1:30 PM

What an amazing piece of artwork. I love how it was personally signed to your husband....that makes it even more special. Happy VTT!

That's an interesting portrait. I never heard of the rabbi before.

That is an amazing piece of work and love hearing your story behind it.

What a wonderful piece of artwork...and to have it signed to your husband personally..It's so very,very special...and thank you sever so much for sharing. Happy VTT..

How lovely to have such a special piece given to your husband! Thank you for the history on both the artist and the rabbi- I love all the things I learn while hopping around on VTT! :)

I enjoyed learning about the artist, have a great VTT

What a unique piece of art! And dedicated to DH too!

That is a marvelous work of art, and you and DH are lucky indeed to have a signed one. I appreciated the information both the artist and subject.

That is such a treasure Miri how wonderful to have that in your home.

Great piece of art. The story makes it even more special.

How special it was signed to your husband & how great the artist is still active at 81!

I love etchings and how exciting to have one dedicated to your husband! Thank you for the background on this - how wonderful to still be active as an artist at 81.

Wow...that's a treasure! Thanks for sharing :)

This is an amazing piece, very special!

What a great piece of history. May it always be treasured by your family. Happy VTT!

What a lovely vintage etching. How wonderful that both men survived the horrors of those camps. God Bless them both. A very touching VTT!

What a wonderful etching and story, too.

Really thinks that a special picture, I will have to research the artist. Happy VTT

That is a great portrait and a great and intresting story also. Thanks for stopping by.Julian

Wow how amazing this piece is! Thank you for sharing such a piece with us.

I found you through VTT and have decided to become a follower of your blog, I'd like to invite you to become one at La Bella Vie as well.
See you there!
Terry

Interesting piece of art. I've been away from my computer so have enjoyed scrolling through your recent posts that I've missed. Love the silver pieces.
Thanks for stopping by HFTS. I appreciate your thoughtful comment. ~ Sarah